Shilpa Shetty's Ganesh Chaturthi Binge: How Many Of These Marathi Delicacies Have You Tried? 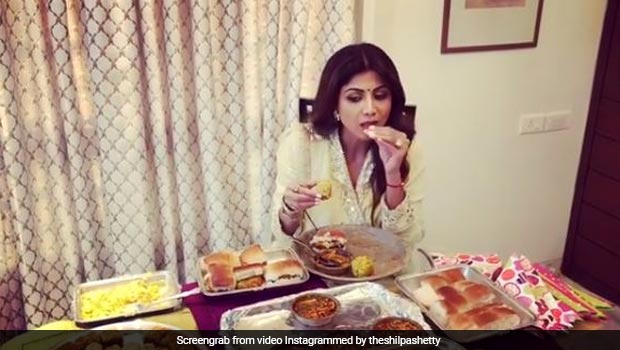 Bollywood binge queen Shilpa Shetty, who is known for her super sumptuous weekend indulgences, has been enjoying the festival of Ganesh Chaturthi thoroughly. The diva posted a number of pictures and videos of Ganpati sthapana and Ganpati visarjan on her Instagram page. Shilpa has been known to celebrate all festivals for the same gusto and most of her celebrations are exactly our kind- ones with lots of food! Ganesh Chaturthi is no exception and Shilpa Shetty posted a video of her festive Sunday binge, which she celebrated by gorging on delicious-looking traditional Marathi foods and desserts. Shilpa Shetty was invited to her friend's place for Ganpati celebrations and she got treated with a table full of authentic Maharashtrian sweets and savouries and watching the video will give you intense cravings for vada pav and misal pav!

Maharashtra celebrates Ganesh Chaturthi in an especially grand manner and most Marathi homes are filled with enticing aromas of various delicious dishes including modaks, puran poli, etc. Shilpa Shetty binged on crispy vada pavs and misal, as well as sweets like mohanthal and khaja.

Doesn't everything look extremely appetising? If you're feeling hungry after watching this video then you're probably not alone. For the uninitiated, vada pav and misal are two of the most well-known Maharashtrian dishes. Vada pav is made by deep-frying a crispy and spicy mashed potato stuffing and it is enjoyed with a pav or a bun and some fried green chillies. Misal is a spicy mixed lentil curry that is topped with chopped onions and crunchy sev and is again paired with pav. Khaja or chirote is a tiny, circular, crispy, fried and sugar-coated puri that is a big hit in Maharashtra during festivals like Diwali and Ganesh Chaturthi. Last but not least, mohanthal is a barfi prepared from gram flour or besan, milk, sugar and ghee and spiced with cardamom and saffron.

So how many of these Maharashtrian delicacies have you tried till now? Let us know in the comments section below.