Shilpa Shetty binged on phirni and mini-jalebis with rabdi on Sunday, to celebrate Ramadan 2018. 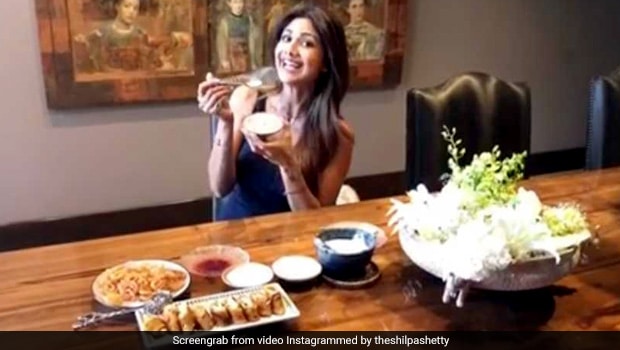 Highlights
Bollywood's binge queen Shilpa Shetty Kundra was at it again this Sunday. The diva, who recently made it to the list of '30 Top Health and Fitness Influencers in India' posted a Ramadan special Sunday binge video and for that, the beauty chose two of the most classic Indian desserts- phirni and jalebi with rabdi! Shilpa's Sunday binge came just a day after her son Viaan Raj Kundra celebrated his birthday with a non-refined sugar party. Shilpa had taken extra care to order in special cake and cupcakes from Mumbai-based pastry chef Pooja Dhingra and everything at the party had been free of processed sugar.

On Sunday, Shilpa Shetty binged on some phirni, which is a rice and milk pudding dessert served cold and in an earthen bowl, as well as some syrupy sweet coiled mini-jalebis with rabdi.

Joining her for this indulgence session was her cat Simba, who also charmed us with his antics. Have a look!

Doesn't that look simply mouth-watering? Shilpa also revealed on Instagram that jalebis with rabdi is among Bollywood actor Ranveer Singh's favoured desserts! Phirni and jalebis are two of the most loved Indian desserts, served during iftar- the daily 'fast-breaking' spread that Muslims indulge in during the holy month of Ramadan. During the rest of the day, Muslims refrain from eating even a morsel of food. The iftar spread is rich and sumptuous and it usually consists of a lot of non-vegetarian delicacies and flavourful desserts. Phirni is a dessert that is eaten both during sehri or the early morning meal and iftar.

Phirni is prepared by slow-cooking rice flour in milk. It is then spiced with green cardamom powder, which gives it a rich aroma. It is topped off with crushed almonds and pistachios, as well as dry fruits and refrigerated for about two or three hours, before being served. Other desserts that are often served with Ramadan meals include baklava, sheer khurma or sevaiya and shahi tukda. However, phirni is one of the most common desserts featured in these meals, because it's easy-to-prepare at home and always tastes great! Well, we must say, Shilpa Shetty does know how to celebrate every single festival, the right way!