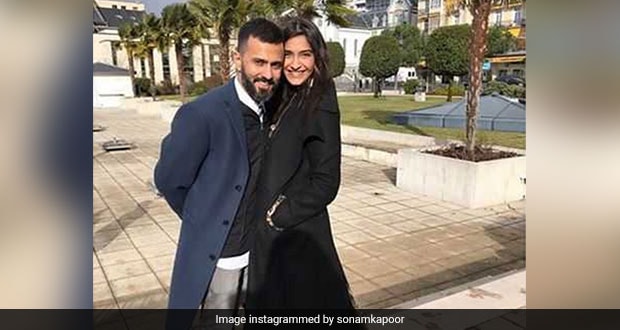 Bollywood actor Sonam Kapoor Ahuja's husband Anand Ahuja is celebrating his 35th birthday today. Anand has been the talk of the town, ever since it became known that he was dating Sonam Kapoor, who is currently one of the top female actors in the industry. The couple got married in May this year, in one of the most talked-about and starry affairs of 2018. However, both Sonam and Anand have been busy with work since then. The entrepreneur just opened the second store of his contemporary clothing brand Bhane in Bandra, Mumbai amid much fanfare and a lot of publicity, so it's celebrations all the way for the lovely couple.

Sonam Kapoor Ahuja and Anand Ahuja had been posting mushy and romantic messages for each other on Instagram, long before they were engaged and today was no different, when Sonam Kapoor posted a very loving message for her husband on her Instagram page. Sonam also posted a picture of a beautiful custom-made basketball cake that she got made from a Delhi-based patisserie Sugar Blossoms Cake Studio.

Doesn't the cake look amazing? Anand Ahuja is known to be a basketball fan, which explains the theme of the birthday cake. The message on the cake reads, "It's your time to soar! Happy Happy Birthday! We love you". Sonam Kapoor shared a number of pictures of the two of them together and captioned the birthday post with a very sweet message: "To the love of my life and the kindest gentlest soul I know, a very very happy birthday! You make my world better and I'm so blessed you were born today. "We are each of us angels with only one wing, and we can only fly by embracing one another." Luciano De Crescenzo."

Anand Ahuja also posted snapshots of the lovely cake on his Instagram story, thanking Sonam for the cake, saying, "@sonamkapoor.. you are my wings." You have to admit that these two have set the bar for all our relationships pretty high. We wish Anand Ahuja a very happy birthday!