Spiders On the Menu as Northeast India Embraces Slow Food 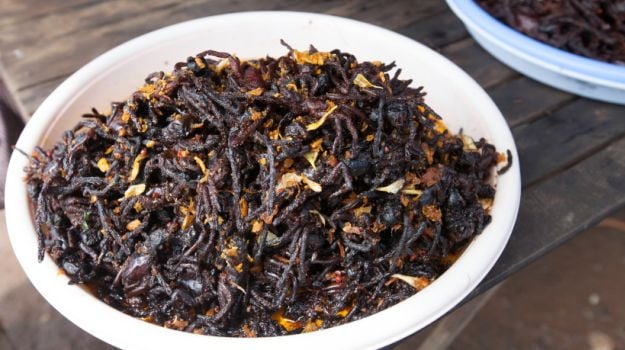 Welhite Naro proudly proffers his fried spiders and grilled crickets along with a somewhat less exotic dish of millet and squash -- a small sample of the disappearing delicacies of India's remote northeast. Naro is a farmer from Nagaland, one of the eight states that make up northeast India -- an area connected to the rest of the country by only a narrow sliver of land and with its own distinct cultural and culinary traditions.

"This is a snail collected from the paddy (rice) field," he told visitors at a recent international food fair as he encouraged them to taste his produce.

"You have to eat it like this," he said, as he demonstrated sucking the snail from its shell.

Naro was one of around 40 exhibitors gathered in the northeastern state of Meghalaya for the Mei-Ramew festival, supported by the global Slow Food movement that is based in Italy and promotes local traditional cuisine.

Geographically isolated from the rest of India, the northeast has maintained a food culture all of its own.

Pork -- the staple meat of neighbouring China but relatively scarce in most of India -- features prominently on the dinner tables of the northeast.

The region is also home to a wealth of plant varieties that experts say are dying out as diets become more standardised -- a global trend that the Slow Food movement wants to combat.

Nongtraw, a village in Meghalaya with stunning mountain views and only around 200 inhabitants, is on the front line of the battle to preserve regional food varieties. The campaign began five years ago when the villagers, who belong to the matrilineal Khasi tribe, became concerned that the cultivation of the nutritious local staple millet was dying out.

Millet had been used to make a variety of snacks as well as the local beer, but villagers were increasingly opting instead to buy state-subsidised rice.

"Only two families were growing millet in 2010 because at that time we could get rice through the public distribution system," said local farmer Pius Ranee, 27

Now they grow between 20 and 30 different crop varieties simultaneously in each field, with the village council deciding which crops will be planted. It has even banned villagers from growing the straw used to make brooms -- a lucrative crop -- to try to avoid a food monoculture.

According to the Slow Food movement, just three cereals -- wheat, rice and corn -- now account for around 60 percent of global consumption. Three types of apple account for 90 percent of those eaten around the world, even though there are thousands of less well-known varieties.

Even in an area where chain restaurants are few and far between -- McDonald's has around 300 outlets in India, none of which are in the northeast -- there are concerns that diets are becoming too standardised. Indian dietetics expert Gracedalyne Rose Shylla Passah said recipes for many local foods such as the small snacks made of rice that are popular among the Khasis have never been written down.

"The knowledge of how these snacks are made is passed only verbally, only from mother to child. There is no documentation on this," said Passah, of Avinashillingam University in the southern city of Coimbatore.

For producers, the Mei-Ramew festival provided an opportunity to introduce new consumers to the foods of the area -- from rare varieties of fermented bamboo shoot to Jaha, a local rice variety known for its sweetness -- both listed as endangered by the Slow Food movement.

As people from the Khasi, Garo and Naga ethnic groups indigenous to the area showed off their food traditions, the aroma of grilled pork and spiced beef rose into the air.

"Even in the most remote villages, the younger generation is facing a choice between standardised food and this culinary heritage," said Rahul Antao, coordinator of the North East Slow Food and Agrobiodiversity Society (Nesfas).

"These communities are the guardians of this biodiversity."