Spread the Word: If You Think Hummus is a Dip, You've Been Doing it Wrong 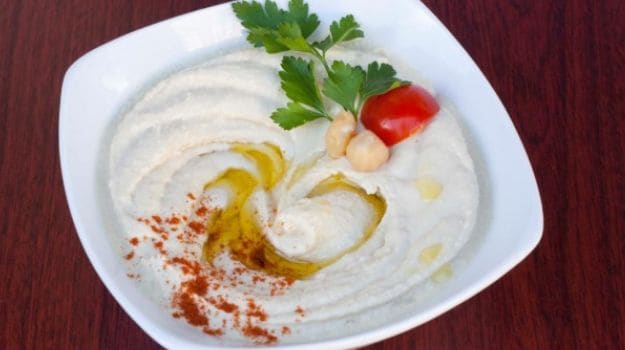 Hummus – for breakfast, lunch or dinner. Photograph: Sophia Evans for the Observer

Packed with protein and best enjoyed with pita bread and barbecued meats, this Middle Eastern staple of hummus bi tahina can be a meal in itself.

What a gift is hummus – a delightful little meal that transcends cultures, continents and centuries. At its best, hummus is creamy, unctuous and almost meaty in its fullness of flavour. And that’s no accident: the dish of chickpeas and tahini is packed full of protein.

All over the Middle East and North Africa people eat hummus bi tahina. They might eat it at breakfast, lunch or dinner. In some regions, it’s a meal in itself.

What they won’t do is treat it as a dip left on a table beside some cabanossi for guests to pick at absentmindedly while they wait for the real food to arrive. Australians may be surprised to hear that hummus is not a dip. They may even consider that statement controversial. But if Middle Eastern food really is the new Mexican – and given the number of Lebanese pop-up restaurants in Sydney and Melbourne right now that’s a foregone conclusion – it’s time we learned to respect the absolute staple dish of the cuisine.

In Beirut it may be served as part of a meze with felafel, kibbeh and tabbouleh. A hungry human in Jerusalem may sit down to a bowl of masabacha – hummus served with whole warm chickpeas, olive oil and a sprinkle of paprika – and eat it with wedges of raw onion and fresh, warm pita. Or maybe they’ll have hummus ful, hummus served with a paste of ground fava beans. Sometimes it will be served with a drizzle of sauce, perhaps of parsley, olive oil, lemon and garlic, and maybe some hot peppers if you’re that way inclined.

Mo Moubayed, one of the owners of Thievery, a new modern Middle Eastern restaurant in Sydney’s Glebe, said hummus was a constant throughout his childhood.

“Growing up as a Lebanese kid, hummus was always there on the table,” he said.

“Although these days we have hummus as a starter, it was actually there as part of a main meal. It goes really well with lamb or beef, and it’s a must to have around a barbecue if you’re cooking those meats.

“It is something you’d always expect in the fridge of a Lebanese person. As a kid, if I was hungry I’d just pull it out and enjoy with a carrot stick and it’d be absolutely beautiful.”

Hummus is the Arabic word for chickpea, so the correct Arab term for what we know as hummus is hummus bi tahina. The tahina refers to the second ingredient in hummus – tahini, which is a paste of ground sesame seeds. The ingredients of hummus are simple and invariable: chickpeas, tahini, garlic, olive oil, lemon juice, salt. Nothing more, nothing less. And always, the best quality ingredients must be used.

And it must be eaten properly.

“You should eat hummus with your hands,” says Moubayed. “I don’t mean with your fingers, but eat it with your hands and Lebanese bread and lots of really good olive oil.”

There’s an etiquette to this: hold the bread at the tips of your five fingers, dip in the bowl and move in a clockwise direction with a quick flick of the wrist.

The secret to good hummus is not so secret, which makes it all the more surprising such inferior products are flogged so widely in Australia. Both Moubayed and Ibrahim Naji, chef and owner of a restaurant bearing his name in the Arab-Israeli village of Abu Ghosh, answered with identical tips when asked the secret to good hummus: the chickpeas must be boiled overnight and allowed to cool before mixing with the other ingredients. Use substandard quality olive oil at your peril and avoid anything resembling a food processor.

Chickpeas should not be bought in a can. The texture and taste is inferior to those bought dried in bags.

After boiling, the chickpeas should be mushed and mixed by hand with a pestle and mortar or other such device. There’s a reason for that: you have to watch it as you make it, feel the texture, taste for lemon, seasoning and garlic. Have you added the right quantity of tahini to bring out the nutty flavour that gives hummus its fullness of flavour? These things can’t be measured in spoons and cups, but only with human eyes, hands and taste buds.

“Don’t measure the ingredients,” Naji told Guardian Australia through an interpreter. “You have to be able to feel it.”

He should know. His hummus has been voted by the Jewish Journal’s food blog as the best in Israel and his village once held the Guinness world record for the biggest bowl of hummus. As a Palestinian citizen of Israel, he takes his food history seriously, as do most residents of Abu Ghosh. That’s why they were so affronted when in 2009 Lebanon unilaterally declared hummus Lebanese and made a bowl of it weighing 2,056kg to prove it. The village of Abu Ghosh wasn’t having it. Its response? A bowl of hummus weighing 4,090kg. The Lebanese fought back, making 10,452kg worth of hummus.

Hummus is serious business. And any effort made in taking it seriously will be richly rewarded.