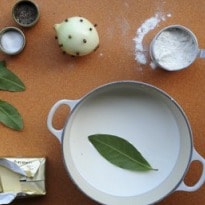 In our new series, each week we ask a different chef to work wonders with those back-of-the-cupboard staples that are often underused or left behind. Here, Tom Kitchin shows us the versatility of the bay leaf in a lasagne, Scotch broth and coq au vin

These wee green leaves are the essence of many dishes and the foundation of much flavoursome cooking. If I'm looking to add a little lift, I almost always reach for bay leaves - either on their own or as part of a classic bouquet garni. So think of bay as more of a spice than a herb: it's at its best when used with other ingredients to enhance herbal warmth or depth of spice.

Originally from the Mediterranean, bay is part of the laurel family, and one of the very few herbs to grow as a tree, which also makes them very different in the way they are enjoyed in food. The leaves are tough and leathery, so rather than eating them, use them to flavour and enhance your dishes. They release their fragrance and flavour best when cooked slowly, so that's why you'll often find them used in lots of soups and stews, but they also work well in desserts, such as rice pudding and creme brulee. It's often a component of the Indian spice mix garam masala, and an essential ingredient in adobo, a Filipino dish in which meat is slow-cooked in vinegar and soy with bay leaves. Bay has been used medicinally since the middle ages, and contains vitamins A and C, iron, calcium and magnesium; try dropping two leaves in boiling water with a pinch of sugar and cinnamon for a restorative drink.

I tend to use fresh leaves; look out for ones with no cracks or blemishes. They will keep in the salad drawer of the fridge for several days, and will freeze well too.

Three ways with bay
• Bay-infused rice puddings - add 1 bay leaf to 500ml milk, 100g pudding rice, 60g sugar and 1 vanilla pod, and cook until soft. Soak 1 gelatin leaf in cold water for 5 minutes, squeeze out then add to the rice. Remove the bay. Whisk 130ml double cream into peaks and mix into 65ml natural yoghurt. Add to the rice with 30g raisins. Pour into 4 moulds and chill for an hour.

• Scotch broth - gently fry 2 chopped onions in a little oil then add 250g each of chopped carrots, turnips and swede, and 2 chopped celery stalks. Cook for a few minutes, add a handful of pearl barley, a handful of soaked peas, stock and bay leaves. Simmer for 2 hours.

• Coq au vin - cook some shallots in butter in a casserole dish, then stir in some garlic cloves, chopped streaky bacon, thyme and bay leaves. Cook for a minute, then add mushrooms and a jointed chicken, along with chicken stock and red wine. Simmer for 30 minutes, until the chicken is cooked.

1 Heat the oven to 180C/350F/gas mark 4. Put the milk in a saucepan with the onion and bay. Place it over a low heat and let it come slowly to a boil, infusing the milk. Take off the heat and discard the flavourings.

2 Melt the butter in a pan, stir in the flour and cook for 1-2 mins. Gradually stir in the milk. Gently simmer and stir, until the sauce thickens, then season.

3 For the lasagne, melt half the butter in a pan over a medium heat. Add the leek, season then sweat for 2 minutes. Add the spinach with the garlic and cook for a minute. Drain off the liquid.

4 Use the rest of the butter to grease an ovenproof dish. Spoon a layer of the sauce over the bottom of the dish and layer a third of the lasagne sheets on top. Spoon half the leek mix over the lasagne, followed by a third of the salmon. Cover with a third of the béchamel and sprinkle cheese over it. Repeat, then finish with lasagne, using a little sauce to cover it. Scatter over the remaining salmon and cheese. Bake for 45 minutes, then serve scattered with dill.

Tom Kitchin is chef proprietor at Michelin-starred The Kitchin and gastropub The Scran and Scallie in Edinburgh. Recipe taken from Kitchin Suppers (Quadrille)

Photo: The oft-forgotten bay leaf is the challenge for our inaugural Storecupboard Challenge chef, Tom Kitchin. Photograph: Jill Mead for the Guardian