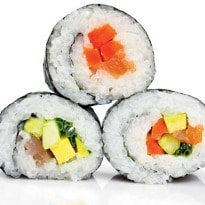 Sampling sushi was, until a decade ago, deemed the rough equivalent of pinning on a badge of culinary courage. These days, this Japanese delicacy and Indianised variants are served around Mumbai's restaurants, across budget lines. But if it isn't raw, is it still sushi? And, should you bite into it or eat it whole? The Guide makes it easier with a trip down Sushi Street.

You're dining at a nice restaurant. Maybe you're with a date; with friends or co-workers. The server places a platter of assorted sushi on your table and you dig in like you've done this a thousand times before. So far, so good. But if you've picked up a slice of the pretty pink ginger from the side of the plate and placed it atop your selection, that, right there, is a dead giveaway. Now everyone knows you're a sushi novice. If you know enough to not confuse the hot Japanese mustard Wasabi for some mild chilli sauce, there's hope for you.

All you need to do before that date with your sushi sorority is to read this:

>> Oh, Fish: The pickled, young ginger or Gari that accompanies portions is neither to be consumed like condiments with Chinese food nor to be appreciated like you would garnish. It's meant to cleanse your palate, between samplings of different cuts of fish. You should also know it has a potent flavour. So if you'd prefer to keep from turning pink (in the face) yourself, it's probably best to just avoid the ginger altogether. Another common mistake is to drown your choice of sushi in Shoyu -- the type of soy sauce sushi is served with. Remember, the idea is to savour the delicate flavours, not mask them.>> Roll with it: Though at most sushi-yas (places that serve sushi) in Japan, you could opt for Okimari, which, put in a nutshell, refers to a set sushi menu, Okonomi which allows you to pick the variety of fish you'd like or Omakase, which means the chef decides for you, here in the city, you'll recognise, there's no choice to grapple with.

However, at some restaurants in Mumbai, you can now at least pick what kind of sushi you'd like, though the variety that's de rigueur here is Makizushi, cylindrical pieces rolled with a bamboo mat. Under that label, you may find Hosomaki (thin rolls), Futomaki (fatter rolls), Uramaki in which the vinegared-rice, instead of seaweed, forms the outer layer and, on the rare occasion, Temaki (cone-shaped rolls). You may also occasionally find Nigiri on the menu, which is a small mound of rice topped with seafood.

>> All about size: Sushi, expertly made, will always be bite-sized. This is because an Itamae (ee-ta-ma-ay) or qualified sushi chef knows that biting into these parcels won't just be messy, it will also disperse the flavours, which must ideally bombard the palate together. So, you want to eat the whole piece rather than nibble on it and while the Japanese would tell you there's absolutely no reason not to use your fingers (unless you're eating sashimi, which are plain cuts of raw fish), using chopsticks would spare you from the reprimanding stare of bourgeois Mumbai diners.

>> Raw delight: With over a hundred varieties of sushi available in the Land of the Rising Sun, and new recipes and combinations being devised constantly by sushi chefs around the globe, it's almost impossible to lay down a permanent list of "authentic" recipes.

Despite the dish's reputation, only a handful of fish can be served raw, so cooked sushi is not blasphemous. Neither is drinking your Miso soup directly from the bowl, by the way -- that is, in fact, custom. Now that you're ready to enjoy your soup, sushi and saké, here's a toast to remember: "Kanpai!" It means -- "Empty your cup" and if you're dining at a good sushi place, we have no doubt you will.

Must try in Mumbai


>>  Nariman Point's Pan-Asian restaurant Vongwong has just launched a "cooked" sushi menu which will package the restaurant's specialities such as Wasabi Prawns and Wasabi Broccoli, Thai Steamed fish, Tofu Tempura roll with Thai spices and their Spinach and Spicy peanut roll in sushi parcels. Non-vegetarian rolls are priced at R550 while Vegetarian Rolls are for Rs 450 (taxes extra).

Comments>> Fenix, the all-day-diner at The Oberoi Hotel, Mumbai has Chef Augusto presenting a contemporary Sushi and Sashimi menu until March 4, but only for lunch and dinner, not through the day. Japanese-cuisine aficionados can therefore look forward to Ikura-Hotate (Salmon eggs -- scallops) with ceviche dressing, Seared Maguro (tuna) with sesame dressing, Shake Sashimi with Wakame (seaweed) in Yuzu Miso dressing and Nigiri specials which include salmon, tuna, yellowtail, scallops, sweet shrimp and unagi (eel). There's Shojin rolls (borrowed from the cuisine of Japanese Buddhist monks) too, made with cucumber, asparagus, enoki mushrooms, mizuna (Japanese mustard) and spinach and the caterpillar, fresh-water eel, crabmeat, cucumber, and avocado, with sesame seeds.