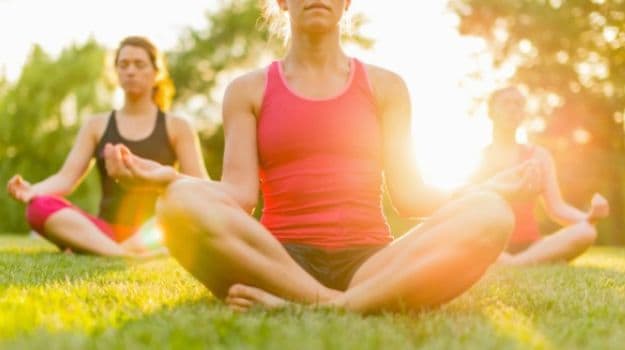 Yoga asanas were performed mid-air at 35,000 feet above the sea-level, arguably the first time ever! The asanas called Upayoga or useful yoga were performed as a trial-run aboard the Delhi-Guwahati and Guwahati-Delhi flights of budget airline SpiceJet with over 180 passengers and crew. The Gurgaon-based carrier has teamed up with the Isha Foundation to conduct mid-air yoga sessions on its select Boeing flights the 21st of this month which will be observed as the International Yoga Day.

Talking about the yogic postures that were demonstrated, Gita, a teacher with the Isha Foundation said the session was designed to reduce stress for passengers who travel for long hours. "These are safe and simple postures which can be done by anyone, anytime and anywhere. They help in relieving stress accumulated in the upper neck and spine," said Gita.

The passengers on board, who had no clue about the onboard yoga demonstration, were mostly taken by surprise, but observed the postures being performed keenly. "Yoga on flight is good. People travel for different reasons- business, meetings, leisure. And everyone carries stress. Such an exercise will benefit them, because it helps in relaxing," said Dhritismita, a passenger.

Spicejet said this was part of its endeavour to do something new for passengers. "Since yoga day is being sponsored by India, it is very important for us. Initially we had planned to distribute pamphlets and CDs from the Isha Foundation, but then we got the idea that we'll make our own crew do yoga on board," said the Senior Vice President, In-flight Services, Kamal K Hingorani.

The airline will have its crew perform yoga on about 25 flights on June 21. They will be distributing CDs and pamphlets about the practice and benefits of yoga. The flights for on board yoga have been selected keeping in mind minimal turbulences so as to allow a hassle free 15 minute yoga demonstration, along with a minimum two-hour long flight duration, said Hingorani.

Promoted
Listen to the latest songs, only on JioSaavn.com
(Yoga Day Celebrations at UN to be Broadcast at Times Square)

Many passengers attempted to follow the volunteers as they were seen rotating their necks, shoulders and arms, while sitting on their seats. "It's such a great idea. So good for creating awareness," businessman Ramesh Makwana said.

Some travellers, however, could not decide how good or bad this trend of taking yoga to aeroplanes is. "I have always done yoga in the morning, so after having my meal this was not very relevant for me. But it's a new experience and there is a huge demand for yoga now. Who knows it may catch on," said another passenger Prabhjyoti Chaddha.