The Christmas Turkey: Is it Ever Worth the Bother? 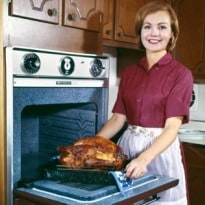 No matter how you cook it - and I have one recipe that needs 32 items in the stuffing alone - a Christmas turkey will never be more than just fine.

In his brilliant book of essays, The Man Who Ate Everything, the food writer Jeffrey Steingarten describes his adventures with turkey. Specifically, he describes his adventures with a recipe for turkey by Morton Thompson, a newspaperman of the 1930s who sometimes devoted his column to food. According to Steingarten, one November Thompson provided his readers with a turkey recipe so elaborate it passed into mythology, cooks speaking of it in such reverent tones it was as if they'd joined a cult. Down the decades, it was occasionally reprinted, and eventually reached Steingarten in a tattered article from a 1957 Gourmet and a quote from Robert Benchley, the humourist, which read: "Several years ago, I ate a turkey prepared and roasted by Morton Thompson. I didn't eat the whole turkey, but that wasn't my fault. There were outsiders present... I will just say that I decided at that time that Morton Thompson was the greatest man since [Brillat-]Savarin, and for all I know, Savarin wasn't as good as Thompson."

Naturally, Steingarten found all this irresistibly provocative, and he resolved to cook a bird à la Thompson. This is not a straightforward business. First, the cook must rustle up the stuffing - a byzantine combination of, among other things, breadcrumbs, veal, pork, butter, caraway seeds, poppy seeds, apples, orange, crushed tinned pineapple and preserved ginger - and sew it carefully into the bird, which is then browned in a very hot oven. Stage one is now complete (and the cook's morning, given that the stuffing contains 32 ingredients). The bird is then painted with a paste of flour, egg and onion juice, dried in the oven, a process that is repeated over and over until it is safely sealed under a stiff crust. Finally, the turkey is roasted for five hours, during which time it must be basted every 15 minutes with a gravy made using giblets, liver and heart. Like some weedy patient in a hospital bed, it should also be rotated three times. At the end of all this, it will emerge from the oven as black as a witch's hat.

Why, you may ask, would anyone want to do this to a turkey? Well, according to Thompson, inside its shell the bird will be "giddy-making" with wild aromas. The meat, meanwhile, will be so wet "juice will spurt from it in tiny fountains high as the handle of the fork plunged into it", and its taste will be "crammed with mocking flavour". Carving will not be necessary: "speak harshly to it and it will fall apart". Thompson ends by saying that "no pen, unless it were filled with Thompson's gravy, can describe Thompson's dressing, and there is not paper enough in the world to contain the thoughts and adjectives it would set down, and not marble enough to serve for its monuments". Did Steingarten agree? Yes - though the bird having slipped from his grasp, he sustained burns to his shins (he was, alas, wearing shorts). "The meat of this turkey," he writes, "is the most flavourful and moist you will ever taste, deeply imbued with the multitudinous perfumes of the stuffing."

I love this story. It's not only that I can never get enough of Steingarten and his genteel, nerdish greed. It also backs up my strong belief that turkey requires so much faffing to make it delicious, it's hardly worth the effort. Two years ago, cooking Christmas dinner for the first time, I did all the right things. I ordered - in April, having first remortgaged my home - a Kelly bronze turkey, which later entered the house to ceremonial baroque trumpets. In the hours before it was taken to the oven, it lay on a plump cushion stitched of golden thread, and received lengthy in-house spa treatments involving butter, seasoning and the tips of my fingers. Once it was inside the toasty berth of the oven, I tended it like a baby, hardly daring even to cast my eyes over my Beano annual lest it grow dry. It was then rested for 50 minutes, encased in a blanket of pure silver over which I placed a tea towel of finest cashmere. Finally, I carved it, and with such gentle precision, a surgeon would have been proud.

And the result was... fine. Nothing more, nothing less. Just fine. This fine-ness then sat around for several days growing ever more desiccated and mournful, after which, unable to face its recriminatory symbolism a moment longer, I dispatched it to the fox-attended coffin that is my north London dustbin. All I have to say myself, then, on the subject of turkey is: don't. For a large crowd, I favour beef. For a small one, pheasant, pot-roasted. A book by Jeffrey Steingarten, on the other hand, would make a perfect present for anyone, however they feel about turkey.

Photo Credit: 'Roasted for five hours, it must also be rotated three times, like a weedy patient in a hospital bed'. Photograph: Alamy