The Egg-White Craze: It's No Yolk 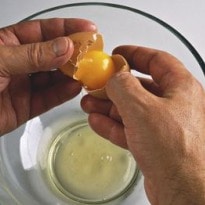 There is a national egg-white shortage in the US after a rise in demand for yolk-free omelettes, sandwiches and shakes. Do you ditch the tastiest, most nutritious part of the egg?

News that health-food obsessives have whipped up a national egg-white shortage in the US comes as no surprise to me. I've just returned from a trip to Los Angeles, where I can confirm that it's virtually a crime in some parts of the city to eat the yellow bit of an egg.

It's true that the (utterly joyless, if you ask me) egg-white omelette has long been the favourite skinny option for weight-obsessed celebs. But demand for egg whites is rising, as fast-food chains in the US dish up albumen-only breakfast sarnies, flatbreads and burritos to the masses as a nod to healthy eating.

According to the US food price information service Urner Barry, dried egg-white stocks are now at record lows while the cost of liquid egg whites soared by 80% in the 12 months to December. A curious result of the albumen craze is that egg whites are now significantly more expensive than the yolks, according to industry analysts.

For the moment, the UK is being spared the joys of McDonald's Egg White Delight, but our appetite for whites does seem to be sharpening. Egg-white omelettes now appear as standard breakfast fare on many UK restaurant menus, from posh and pricey to family-friendly chains. And it looks as though lots of our kitchens are becoming yolk-free zones.

Anna Richey, the co-founder of the Two Chicks liquid egg white company, says demand for the product has grown in line with a new boom in the popularity of high-protein/low-carb diets, the likes of which has not been seen since the peak of the Atkins diet craze in 2004. According to the consumer research group Mintel, the number of high-protein product launches has tripled in Europe over the past five years.

"Demand for egg whites is definitely growing in the UK," Richey says. "Egg whites are almost a unique product, as they're fat-free, cholesterol-free, low carb and high protein. Our customers are people who are health conscious and we have lots of demand from people such as rugby players who might put 15 egg whites into their breakfast shake. And because our egg whites are pasteurised, they're safe to eat without cooking."

But hold on. Although yolks are high in fat and cholesterol, scientists now believe the role they play in raising cholesterol levels is very small and they are actually the most nutritious (not to mention best-tasting) part of the egg. But albumen advocates praise the whites for being protein-packed and virtually fat-free, as well as cheap.

While I'll pass on eating whipped air for breakfast, I'm happy to force down my protein via an egg-white cocktail. With more UK drinkers shunning beer and wine in favour of tipples poured from a shaker, barmen are mixing more of the goop than ever into classic drinks such as clover clubs and sours. James Fowler, an award-winning barman and the owner of The Library cocktail bar in Bournemouth, says many bars buy pasteurised egg whites ready-separated in cartons to save the hassle of cracking eggs, and for food safety reasons. "We use fresh eggs because we have a restaurant, so we can always use the yolks," he says. "But I often see real eggs being used in bars and the yolks just thrown in the bin. It's very wasteful."

And there's the thing. While I dislike the idea of buying ready-separated egg whites (although MasterChef's Monica Galetti and Nigella give them the thumbs up) I confess to not always doing the right thing by yolks. Richey says that all the yolks separated out for Two Chicks egg whites are sold to cake and mayonnaise manufacturers, so none are wasted, which makes sense for a business. But I'm ashamed to say that more than once I've separated eggs for meringue and set aside the yolks with the best of intentions of using them later. Let's just say that they haven't always made it into mayo.

What about you? Has the egg-white craze got you ditching your yolks? Or do you prefer your whites and yolks on the same plate?