The Hole Truth About Jarlsberg Cheese 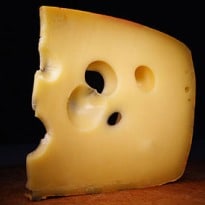 Loved for its nutty flavour and deliciously melting qualities, Jarlsberg is Norway's most famous edible export. But what's the story behind its distinctive appearance?

I'm sitting in a dusty beige room in the bowels of a Norwegian cheese factory, watching a man in rimless glasses called Stig patiently point his way around a diagram of the cheesemaking process.

He's talking about pH levels and micro filtration, which is making me strangely twitchy because such petty details seem irrelevant compared to the real issue: how on earth do they get the holes in the cheese? It's like that old primary school hymn: "Who put the colours in the rainbow/Who put the salt into the sea?", except I sense there's a better answer than "God" here, and I'm determined to get to the bottom of it.

It's partly curiosity, but mostly cynicism. Although I'm keen to conceal the fact from Stig, I'm already pretty convinced that those holes are a gimmick. Norwegian Jarlsberg, as the marketing material proudly informs me, is the No 1 cheese import in the US, and let's be honest, its cartoon appearance must have played a part.

As a cursory glance at any episode of Tom and Jerry or Man v Food will show, "Swiss", as holey cheese is generically known, is big Stateside; second only to "'American cheese", which, as we all know, isn't cheese at all. Even hipsters dig it: Jarlsberg, which melts as beautifully as an ice-cream on a hot pavement, is a firm favourite on the pegboard menus of Brooklyn's overpriced grilled cheese trucks.

Although we're less interested in holes in the UK - strings and triangles being more to our taste - Jarlsberg is still a significant player, with annual sales of £6.9m, and they can't all be to cartoon fans. (That said, a colleague confesses that she and her brother took Jarlsberg sandwiches to school every day because they liked the mild flavour, so there may well be some overlap.) And if we're spending that kind of money, I think the nation deserves to know - are the holes just there to look pretty, or do they serve some deeper purpose?

I put the question to Stig, who looks shifty, and mentions the words "secret recipe" - the marketing man's dream ticket. The holes are apparently classified information, although he will reveal that they are the product of a unique blend of cheese cultures, described as "the very soul' of Jarlsberg", and made to a recipe known only to a handful of Norwegians, who, like the royal family, are never allowed to travel together.

Lest you be as ignorant as I was before Stig's lecture, cultures are collections of microbes that break down the milk by turning the lactose into lactic acid. This creates the tanginess common to all cheese and yoghurt. Then, as the cheese matures, enzymes are released that break down the fat and protein within the curd, producing savoury amino acids and the aromatic compounds that give each cheese its distinctive flavour and character. Different cultures will produce different results, which is why the UK alone produces over 700 different cheeses.

Later, in the factory, Stig brandishes a bottle of Jarlsberg's special blend for our inspection, though we are not allowed to touch, presumably in case I slip it beneath the voluminous white plastic poncho I have had to put on for the occasion. It looks somewhat underwhelming - a caramel-coloured liquid in a chemical flask - but as the essence of Norway's most successful cheese, it has a certain mystique.

Further than this, Stig is tight-lipped, so I'm forced to do a bit more digging, discovering that the cultures for cheeses such as Jarlsberg, French Emmental and Swiss Gruyère, contain some microbes known as propionibacteria, which convert the lactic acid into a combination of propionic and acetic acids, and carbon dioxide. That gas creates bubbles in the still soft and elastic curd, which expand as the cheese ripens: Stig happily shows off his party trick of guessing, by tapping a wheel of cheese, how big the bubbles will be inside. He's pretty accurate.

The size of the bubbles are a good indication of a cheese's maturity; in fact, the ripe cheeses actually bulge with them. The US Department of Agriculture stipulates the "eyes" in "grade-A Swiss" may be no larger than 13/16 of an inch in diameter, apparently because modern cheese-slicing equipment struggles to cope with anything larger.

For all this, it turns out that these much-loved bubbles are just a picturesque byproduct. The main reason for adding propionibacteria is because, as it ferments, it gives the cheese that sweet, nutty flavour that characterises holey varieties such as Jarlsberg, Emmental and Gruyère.

I'm slightly disappointed to discover this prosaic truth and would almost rather believe that the holes were created by tiny nibbly mice, as some wit once told me in my youth. I put this idea to Stig as we hang up our coats - and you know, I think I almost see him smile.