The Spiciest Meals in Britain 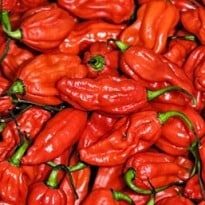 A burger in Brighton is so hot that people have to sign a legal disclaimer before eating it. And a curry in Edinburgh has hospitalised two diners. Here's a roundup of those and other extreme spicy eating challenges.

It used to be that just ordering a vindaloo impressed people. Then it had to be a phaal. Then maybe eating a whole scotch bonnet chilli, once you could get them in the supermarkets. Then, around 10 years ago, things really left the rails. Bhut Jolokias and Dorset Nagas became widespread. People started extracting capsaicin, chilli's main active ingredient, to make ever-hotter dishes. Today in Brighton an otherwise unremarkable burger joint is offering customers a sauce with a reputed score of 9m on the Scoville scale. That's about two or three times hotter than police pepper spray. That's ridiculous.

Yet people eat it. Why? You might as well ask why Hillary and Tenzing climbed Everest. Because it's there. Unlike mountains, however, new chilli-eating challenges are appearing all the time.

The strength of Nick Gambardella's chilli sauce seems to be rising steadily, as does his bewilderment at people eating it. In 2009, reports put the potency at around 6m Scoville units. Now it is up to more than 9m, and has hospitalised several customers. "Why [they] eat it I don't know," Gambardella told the Mail. "I have spoken to people at environmental health but they think it is hilarious." So far around 3,000 people, each signing a legal disclaimer, have tried the burger, but Gambardella isn't one of them. Only 59 have finished it.The Kismot Killer, Edinburgh

All five of the world's hottest chillies, as rated by the Guinness Book of Records, go into the Kismot restaurant's famous "Kismot Killer". And that's not "famous" in a cute, parochial way, you understand, but nationwide, after the dish hospitalised two people and caused several others to be "very unwell" at a curry eating contest in 2011. It "felt like I was being chainsawed in the stomach with hot sauce on the chainsaw", said Curie Kim, the runner-up and one of the people taken away by paramedics. Afterwards the Scottish Ambulance Service urged organisers "to review the way in which this event is managed".

While preparing the Widower, a chicken curry at the Bindi Indian restaurant in Grantham, chefs wear goggles and a protective face mask. The ingredients, as displayed on the restaurant's website, include 20 of their own "Infinity" naga chillies, 10 fresh finger chillies, five scotch bonnet chillies, a tablespoon of chilli powder and a drop of chilli extract. Nobody had ever finished a portion until consultant radiologist (and daredevil) Ian Rothwell managed it in January last year. "It took Mr Rothwell just over an hour," said Muhammed Karim, the restaurant's boss, "but that included a 10-minute walk down Grantham High Street when he started hallucinating."

The Fallout Challenge, Bristol
Two competitive eating disciplines come together in the Fallout Challenge at Bristol's Atomic Burger. A triple burger, with triple cheese, sandwiched between two deep-fried pizza slices, with triple fries on the side, would be too much for most people, even without the ghost chilli extract (4.2m Scoville) in the sauce. "What makes our challenge different is it's not just ridiculously hot but it's big too," says co-owner Martin Bunce. What makes it a good idea is vaguer.

Comments​Photo: How much chilli can you handle? Photograph: Alamy