The Supper Club from South London - Via Nigeria, Sierra Leone and Mozambique 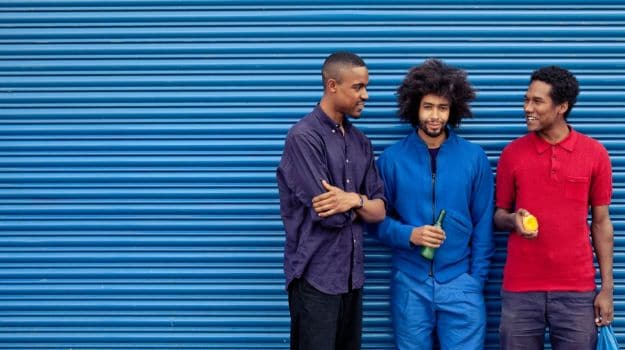 Drawing on their African heritage, three friends are bringing their favourite family recipes – now brought together in a new cookbook – to a wider audience

Tap the words “African food” into a search engine and something unexpected happens: nothing. Not quite a blank page but it feels like the internet is shrugging its shoulders and murmuring, “Dunno.” None of the heavyweights – the BBC, New York Times, the Guardian – appear to have covered the subject with any serious intent; Wikipedia has an entry titled “List of African dishes” but it looks and reads like a B-minus school project. In an age where regional foods are everywhere, where kimchi is already over, it is baffling that we perverse, contrapuntal food snobs seem to have overlooked an entire great continent.

Three friends from south London – Duval Timothy, Jacob Fodio Todd and Folayemi Brown – certainly think so. Before they started working on the Groundnut Cookbook, their new collection of recipes, they went round bookshops to assess the competition. “We went to a fair few and couldn’t find anything,” recalls Folayemi, 26, who co-runs an African music project called MogaDisco on the side. “In one shop – which I won’t name – there was an African subsection in the cookery section and there wasn’t a single book on the shelf.”

Perhaps we are intimidated by the size: where do you start with a continent of more than a billion people, 54 countries and over a thousand languages? But this hasn’t fazed the Groundnut boys. Folayemi’s parents are from Nigeria; Duval, his best friend since primary school, has family from Sierra Leone; Jacob, meanwhile, spent large parts of his childhood in Mozambique, Swaziland and Tanzania. They can’t claim to offer a definitive guide to African food, but they can share their experience of the sub-Saharan countries they know – which, with so little information out there, will be a start and potentially much more.

The Groundnut began in January 2012 as a bi-monthly supper club in south London. It was originally the idea of Duval, a 25-year-old artist and designer, but he had little trouble convincing Folayemi and Jacob, a friend of Duval’s brother at Goldsmiths, University of London.

When they sat down to create their first menu, the centrepiece of the feast was settled quickly: groundnut stew, a West African dish made with peanut butter, chicken and Scotch bonnet pepper. Duval’s grandma made a killer version, while Jacob had been obsessed with those flavours since he’d eaten a similar dish called caril de amendoim in Mozambique as a child. Only Folayemi wasn’t sure, but then he’s allergic to peanuts.

The first Groundnut was mostly friends and family; it was a success in every sense except financially. They slipped into some patterns that have stuck ever since: all three would cook, but on the evening Folayemi would mostly look after front of house, while Jacob and Duval – who have both cooked in the Franco-British café Rose Bakery – would ensure the food came out efficiently. Many of the dishes would be traditional, even old family recipes, but they would be balanced by lighter, fresher sides, maybe a mango kohlrabi salad or orange juice drunk – as they do in West Africa – from fruit that is ingeniously both the drink and the cup.

“The ceremony of eating is very important in African food,” explains Duval. “So we wanted everyone eating at a long table, at the same time, sharing the same food. And one of the aspects is tactility: eating with your hands is done across all of Africa.” Folayemi laughs, “That might be a step too far for some people, but we felt confident that one person would be a catalyst and then the whole table would do it. And it went down well. No one said, ‘Can I have some cutlery?’”

After three years of supper clubs, the Groundnut Cookbook brings their food to a wider audience; home cooks who have never quite known what to do with a plantain or a yam – or couldn’t even pick them out of a line-up.

“We do feel that African food is some of the best food on the planet,” says the 30-year-old Jacob, who has left his job as a research and development practitioner for the Rift Valley Institute [a non-profit that works in east and central Africa] to work full-time on the Groundnut. “The flavours and tastes are so brilliant that you think, ‘Everyone’s got to be excited about this!’ That’s what gives us a lot of confidence.”

This confidence is shared by the publishers Penguin, which paid a six-figure advance, it’s said, for global rights to the Groundnut Cookbook. If this is a gamble, it is not a reckless one: Duval, Jacob and Folayemi are smart, handsome and charismatic; it’s easy to see them on television or opening their own restaurant, should they desire. Moreover, they have created a fun, vibrant cookbook that also evokes a powerful sense of their collective memories and diverse upbringings. But most of all, the time just feels right for African food, a cuisine too long ignored or dismissed.

“When we were making it, we always had this idea that it was not just a cookbook,” says Duval. “It should be an important book for people because it’s a new reference point to a whole continent of food.”