The Vietnamese Pho War - Can You Trademark a Soup? 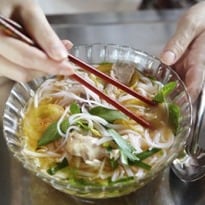 When a small Vietnamese cafe in London announced that it had been asked to change its name because another firm had trademarked the word 'pho', there was an uproar. Can one restaurant 'own' a country's national dish?

Forget the proverbial storm in a teacup; this one has been all-out war in a big steamy soup bowl. Earlier this week a small Vietnamese restaurant punningly called Mo Pho, which has been trading quietly in south-east London for years, announced it had received a legal letter telling it to change its name. Pho Holdings Ltd, which operates the small glossy chain of Pho Vietnamese cafes - eight so far, with a ninth to open in Leeds shortly - said it had trademarked the word "pho" six years ago and only it could use it as the title of a restaurant business.

Potential NAME CHANGE - Its been a while since we made any updates to our posts, sorry about that. But it is... https://t.co/Imj5udlZXt

Cue outrage and accusations of bullying in what passes for the foodie village square these days, or Twitter as it's better known.

@meemalee@PhoRestaurant@MoPho_VietCafe how could they trademark the name of a national dish? *off to TM "soup" before it's too late*

Pho, a deep and restorative beef broth with noodles, meat and lots of fresh green herbs, is the national dish of Vietnam. As one of many furious tweets said, it was a bit like trademarking "sandwich and not letting others use it". Or fish'n'chips. Or pizza. It didn't help that a big company were getting all legal and heavy on a bunch of Vietnamese people selling their nation's most famous dish. For its part, Pho Holdings insisted it hadn't trademarked the dish, only the company name and was merely protecting its business interests.

Whilst all we want 2 do is protect our brand/business, we fully understand the sentiment, & will not pursue action against MoPho-sorry guys

By Tuesday night, Pho Holdings had admitted defeat. "We fully understand the sentiment and will not pursue the action against Mo Pho," they tweeted. "Sorry guys."

Hi all, as promised, here's an update on the ™ dispute. We're sorry it had to go as far as it did yesterday. pic.twitter.com/6up6B8hTyM

In the cold light of the morning after the night before, the company's marketing director, Libby Andrews, accepted it had not been the greatest of days. "Everybody makes mistakes," she said. "The problem is that as a brand grows you get advice from all over." This, she said, had been heavy handed. Then again, she said, it was only in response to a move by a big American company into the UK pho market. "We really didn't mean to suggest we had ownership of the national dish of Vietnam."

So what about the general legalities? Some have suggested that it should have been impossible to trademark the word pho because, like fish'n'chips, it's too generic. However, trademark law is all about context and general knowledge. Six years ago, how many people really knew what pho was? The head-banging foodie types, who congregate around the fabulous Vietnamese cafes on the Kingsland Road in North London knew about it, of course. But the rest of the country? Probably not. If Mo Pho - and the many other restaurants with the word in their title around the country - had been forced to fight the legal challenge, it would have had to prove at great expense that when it was trademarked in the UK, the general population knew that it was the glorious soupy national dish of Vietnam. Which they probably didn't. That's the law, which appears remarkably unresponsive to the fickleness of food trends.

At base, this sort of trademark battle is all about brand turf wars. Whoever owns the word owns the brand. Apparently, since June there have been eight separate applications in the UK to trademark the word "cronut", the cross between a doughnut and a croissant first developed at the Ansel bakery in New York in May of this year. If anybody wins that application they will have a headstart in flogging cronuts. Likewise the mighty Soho House Group has recently applied successfully to trademark blunt, apparently banal phrases such as "duck shop", "meat shop" and "steak shop" for a bunch of restaurants, which isn't much of a surprise given the success of its Chicken Shop in Kentish Town, North London.

It also has a trademark on the phrase Dirty Burger for its outlets in Vauxhall and Kentish Town. Which presumably means that were I, in a restaurant review, ever to describe a hamburger as having the aesthetics of the unclean I would by law have to make explicit the fact that I was not referring to a genuine Soho House product. Kind of takes the fun out of writing. The only people we can be sure are really benefiting from all this deeply unpalatable mess of claim and counter claim are the bloody lawyers.