'Pho' is a popular Vietnamese street food that is eaten for breakfast or lunch. Pronounced as 'Fuh' and not 'Foe', the snack is often found on the streets of Vietnam. 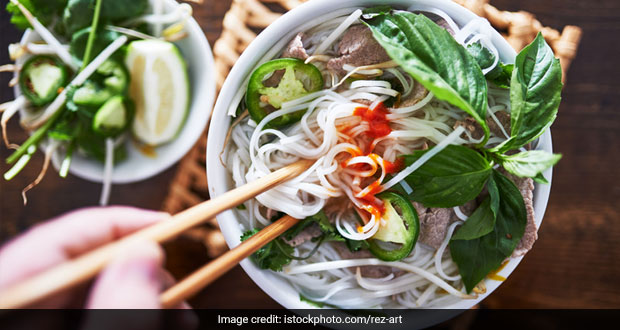 'Pho' is a simple noodle soup that will satiate all your winter comfort food needs.

Winter is all about keeping yourself cosy and warm while battling the cold winter winds. The season brings forth its full fervor and has us scrounging for blankets and warm clothes. But what better than having something delicious to devour while you're searching for warmth in the season? 'Pho' is the perfect winter comfort food that will leave you asking for more.

'Pho' is a popular Vietnamese street food that is eaten for breakfast or lunch. Pronounced as 'Fuh' and not 'Foe', the snack is often found on the streets of Vietnam. The stories around its origin are a little murky, but it is deemed to have evolved from a dish called Pot Au Feu, which the Vietnamese colonial masters, the French, made during their regime.

(Also Read: The Vietnamese Pho War - Can You Trademark a Soup?)

Vietnamese 'Pho' is healthy and filling.

The broth is essentially a noodle soup but the difference lies in the flour with which the noodles are made. 'Ramen', which is also a Japanese noodle soup, comprises noodles made with wheat flour batter. 'Pho', on the other hand, has noodles made from rice flour as is traditional to Vietnamese cuisine. The noodles are thus transparent and shiny in appearance and are perfect to be slurped along with generous amounts of the noodle broth.

This noodle broth with meat and vegetables is unlike anything you will ever try.

Coming to the broth of the 'Pho', it is usually made with chicken. The broth is cooked with spices and herbs that are unique to Vietnamese cuisine such as cinnamon, star anise, cardamom and cloves. Onions and garlic are also put into the broth to add an additional flavour. Some juicy chunks such as that of fish, shrimp, tofu or beef are also added to the broth to make it satiating for the appetite. 'Pho' is served with freshly cut vegetables on the side, including basil, cilantro, lime or bean sprouts. Another condiment that is also added to open up a new gamut of flavour to the 'Pho' is the traditional Vietnamese Hoisin sauce, which is sweet and salty to taste. Sriracha sauce is also an alternative that can be added to the broth to give it a spicier edge.

Customise your 'Pho' according to your tastes and preferences.

The best thing about 'Pho' is that the variations to the dish are seemingly endless. There are infinitely many combinations that you can add and subtract from the broth to make it your own. The dish is originally had with chopsticks and spoons both, so you can suit yourself and devour it as you please. Whether you head out to try the 'Pho' in the local Vietnamese restaurant or whether you attempt to master the recipe in your own kitchen, this delicious noodle broth will surely make a place for itself in your list of winter favourites!