Pho is a one-bowl meal and it consists of flat rice noodles with various different cuts of red meat or chicken. 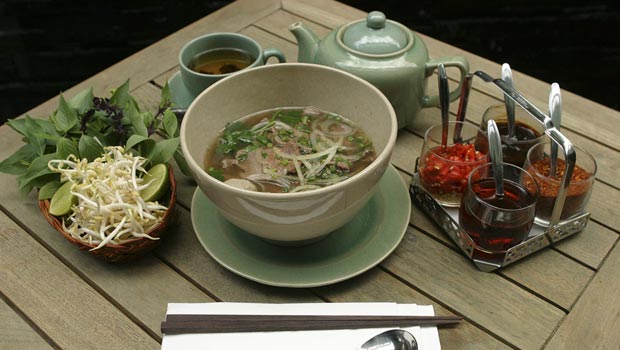 Vietnamese pho is a noodle soup that contains meat and herbs

Pho is a Vietnamese soup dish that consists of noodles, broth, aromatic herbs and a type of meat. The dish is a popular street food in Vietnam, but globalisation and growing interest in food and travel has ensured that the dish has reached the tables of people in far-flung corners of the world as well. In India too, you will find Pho being served in a number of Asian restaurants. The dish is part of the Main Course in a meal and is typically served warm. The broth is made by simmering parts of the meat in water, like bones, along with spices like ginger and sometimes even onions.

Other spices that are used in lending a more intense warming flavour to pho include star anise, cinnamon, cloves, cardamom, fennel seeds etc. The noodles used for making pho are typically made from rice and they may vary in width depending on different regions of Vietnam. Pho is a one-bowl meal and it consists of flat rice noodles with various different cuts of red meat or chicken. For flavouring the broth, the ginger and onions are often roasted on an open fire, before they are added to the stock. The soup is clear soup and the spices are enclosed in cheesecloth before being added to the stock, to prevent them from floating around.

Pho is typically served with a number of different garnishes including greens, herbs, vegetables like green onions, Thai basil, bean sprouts, and accompaniments like sriracha, lemon juice, hoisin sauce etc. Intrigued yet? Pho can be quite a complicated dish to prepare at home, which is why a lot of people prefer to go to a restaurant to try it out. But if you are looking to challenge your cooking skills and want to make something truly unique, you might want to try making pho at home.

Also Read: 10 Most Popular Noodle Dishes from Across Asia

Chef Ananya Banerjee gives an easy step-by-step recipe for chicken pho in this recipe video from her YouTube channel: