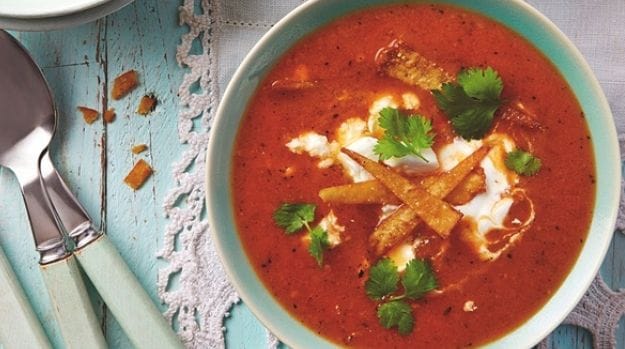 A smoky, spicy Mexican tomato soup, plus grilled or barbecued mackerel with a tart sauce and sharp salad.

At the height of summer, there is no fish I would rather eat than fresh mackerel, especially if it's cooked under a grill or on a barbecue " that succulent, meaty, oily flesh really lends itself to a blackened exterior. I'm giving that gutsy flavour some silky body in this week's second recipe by pairing it with a sesame-and-lemon-laced dressing, while adding some welcome freshness with a pomegranate-dressed tomato salad. But first, to make the most of summer toms (I can't get enough of them in August), a simple version of a traditional Mexican soup that involves roasting tomatoes to concentrate their flavour before blending and thickening the mix with corn or flour tortillas.

This fantastic soup owes much of its deep flavour to dry-roasting the tomatoes and to the wonderfully smoky flavour of the chipotle chilli, which you can now get just about anywhere (even Amazon stocks it these days); if you can't find any, though, substitute with two teaspoons of smoked paprika instead. Serves four.

Heat the two tablespoons of oil in a large, heavy-bottomed casserole or large saucepan and, once hot, add the onions and thyme. Cook, stirring occasionally, over a medium heat for five to 10 minutes, until the onion is soft and translucent, then turn off the heat.

While the onions are cooking, heat your oldest, most battered frying pan and dry-roast the tomatoes and fresh chilli until they're blackened and charred all over " about 10 minutes for the chilli, perhaps a few minutes longer for the tomatoes. Cut off and discard the stem from the chilli, then put it seeds and all in a blender or food processor, then add the blackened tomatoes. Toast the whole garlic cloves in the same pan in much the same way, turning them regularly. After five minutes, they should be blackened all over and soft in the middle. Lift the garlic from the pan, slip off the papery skins (they'll come away easily) and add the cloves to the processor.

Wipe the chipotle with a clean cloth, then cut it open and shake out and discard the seeds. Briefly toast the chipotle in the same pan, to unlock the flavours, about 30 seconds (take care it doesn't burn), then add to the food processor and whizz the lot until you have a smooth puree flecked with little black bits.

Turn on the heat under the onion pan and tip in the tomato, garlic and chilli puree. Tear up one of the tortillas into smallish pieces, add to the pot and season generously. Pour in the stock, bring to a simmer, and leave to bubble gently for 10-15 minutes. Whizz briefly with a stick blender, and add a little more stock if you prefer a thinner soup.

Cut the remaining tortillas into quarters, then stack these on top of each other and cut into thin strips. Heat 200ml vegetable oil in a wok or frying pan over a high flame, until a tortilla strip sizzles when it's dropped in. Fry the tortilla strips in batches until golden and crisp, and drain on kitchen paper (or brush the whole tortillas with oil, bake in a hot oven until crisp, then break into pieces).

Ladle the soup into bowls and top each serving with a generous dollop of soured cream. Sprinkle over the tortilla strips, feta and coriander, and serve hot.

Light a grill or barbecue, or heat the oven to 200C/390F/gas mark 6. Finely chop the garlic, scatter on half a teaspoon of flaky sea salt, then mash to a puree with the flat of a heavy knife. Transfer to a bowl, mix in the tahini, the juice of two lemons and the oil, and season to taste.

Cut the tomatoes into thick wedges, put in a bowl with the shallot, and toss in the molasses, oil, herbs and the juice of the third lemon. Season with the za'atar and some salt and pepper, taste for seasoning and leave to sit for half an hour, for the flavours to meld. (If the tomatoes aren't at their ripest, I add a generous pinch of brown sugar.)

Rub a little oil over the mackerel and season generously inside and out. Grill, barbecue or roast for 15-20 minutes, until a skewer glides into the thickest part of the fish with no resistance. Serve one mackerel per portion with both the sauce and the salad on the side; I'd be tempted to have some Camargue red rice, too, not just for its gorgeous colour, but for its gloriously nutty flavour.

Freeze leftover tortillas, or use them to make quesadillas on a weekday: two of my favourites are pea, mint and feta or chorizo, thyme and new potato. Excess tahini dressing will transform anything from late-night fried eggs to avocado on toast. And if you have any mackerel left over, it would make delicious fish cakes: just add diced, cooked potatoes and lots of fresh herbs, fry in butter and serve with a dill and cucumber salad (or the same tahini dressing).