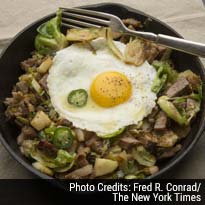 What do you like better: Thanksgiving proper or leftovers from the feast? Both can be delectable, but even if all the guests leave with doggy bags, in most households, masses of leftovers are still a given.

There are many approaches to using them up, midnight turkey sandwiches notwithstanding. The easiest is simply to reheat everything for a day-after buffet. It may not be quite as pretty as the original, but it will taste good, and most people will be happy to have a second chance for stuffing and gravy. A meaty carcass from a big bird, however, is prime for repurposing.

May I suggest hash? Not from a can, and better than you're likely to get at your neighborhood hash house. Most often it is made with leftover roasted or boiled meat (sometimes corned beef) and potatoes, cut into cubes and fried into a crisp-bottomed cake. It is a humble dish, usually prepared in a cast-iron skillet or on a griddle, and invariably topped with an egg. For me, it's the ultimate weekend breakfast or lunch.

This one, made with roast turkey, is ideal made with holiday leftovers. Actually, you could probably come up with a pretty good hash using only cooked leftovers from the fridge: Chop up the turkey and add whatever leftover cooked vegetables remain. But for a turkey hash that tastes fresher, I like to start with new vegetables, like a bunch of parsnips cut in cubes and a few slivered brussels sprouts.

Begin by softening a large diced onion with a handful of bacon lardons. Add the turkey and parsnips, and let it all take color slowly, gradually becoming crisp and golden. Season generously with salt, pepper and chopped sage. A splash of turkey broth helps meld the flavors. Though you could finish the dish on the stovetop, I prefer to pop the skillet into a hot oven to finish browning.Stir-fried thinly sliced Brussels sprouts are wonderful, but if added to the hash too soon, they lose their vivid green color, so I sauté them just before the hash is ready to serve. I also stir in some chopped scallions and jalapeño for brightness. You'll want an egg, a bit on the runny side, to complete the picture. The choice is yours: fried sunny-side up, poached or baked right on top.

The condiment of choice is cranberry sauce, which no doubt is in abundant supply.

1. Simmer parsnips in salted water for about 2 minutes, until cooked through but firm. Drain and set aside. Heat oven to 400 degrees.

2. Put 4 tablespoons butter in a large cast-iron skillet over medium-high heat. Add bacon and fry lightly for 1 minute, then add onions and reduce heat to medium. Cook, stirring occasionally, until onions are soft and beginning to color, about 10 minutes. Season well with salt and pepper.

4. Meanwhile, cook Brussels sprouts: Heat a small amount of butter or oil in a skillet over medium-high heat. Add slivered sprouts, salt and pepper; stir-fry briefly, until sprouts are just cooked, about 2 minutes. Stir in scallions and jalapeño. Spoon sprouts over hash mixture and set aside to keep warm.

5. For each portion, cook 1 large egg sunny-side up. Top hash with fried eggs and garnish with cilantro sprigs.