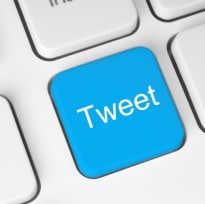 Twitter is acting as a lifeline for people with gut-related chronic illness. A researcher from the University of Warwick has analysed hundreds of thousands of tweets to identify a previously unobserved online network of people with Coeliac Disease. Sam Martin, a PhD student from the Centre for Interdisciplinary Methodologies (CIM), studied the data harvesting 1,800 messages per hour, from a 15km radius of two cities - London and New York. She was able identify an information network discussing the availability of gluten-free food.

Martin discovered an information hub and found that gaps in knowledge - about where to find gluten free food in the city, how to manage symptoms, etc. - were being filled by the same people who are reliant on the missing material. Those with Coeliac Disease used hashtags like #coeliac #glutenfree and many more to make connections online.

"Having previously lived in London, I know how hard it is to find places that provide gluten free food while on the move in the city but it was only when I started using data mining techniques on Twitter that I began to fully understand how many other people there are out there like me," said Martin. "Using co-word and sentiment analysis, I was able to quantify to what extent patients use social networking as a knowledge finding, decision-making or risk aversion tool," she added.

Martin herself suffers from the disease and was able to produce information sharing smartphone apps based on her own searches for gluten free venues and resources. The information would allow users to identify suitable cafes and restaurants nearby in London and Paris."I used the information I obtained to then visualise the flow of patient interaction by creating virtual maps that compared behaviour in both cities.

"One example was a person who acted as a facilitator of knowledge - she frequently received requests for information from other users who were not necessarily her followers, but to whom she then connected to others so that they may in turn help Coeliac or gluten free knowledge seekers," Martin said.

She described Twitter as a big organic hub of social digital interaction, that when analysed using data mining methods - revealed a human ecosystem of communication underneath - in this case uncovering a network of Coeliacs.

"Digital tools such as social media and apps based on GPS are set to revolutionize the self-management of diet-related illness in the city and may well be used to help manage other conditions such as diabetes or allergies to lactose, nuts, eggs or sulphites, for example," Martin added.

Listen to the latest songs, only on JioSaavn.com
Coeliac disease mainly affects the small intestine (part of the gut) and is caused by a reaction of the gut to gluten.