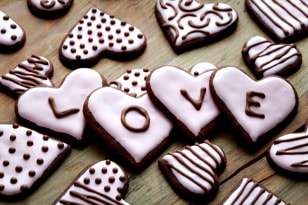 It's Valentine's Day! Someone rightly said, "There is no remedy for love but to love more." With all the gooey love talk surrounding us this day, is it really just about the romance, love and tête-à-tête candy hearts? I wanted to dig out the back-story to find out how it all began. Presenting, a lowdown on Valentine's Day.

Historians suggest that Valentine's Day was initiated during the third century in Rome. According to the popular story, Emperor Claudius II outlawed marriage for young men as he believed single men made better soldiers. However to contradict his views, a young priest named Valentine secretly continued to perform marriages for young lovers.  Emperor Claudius sentenced Valentine to death when he learned about his love-deeds. In jail, he fell in love with the jailer's daughter. Before he was put to death, he inked his last love letter to his beloved and signed it "From Your Valentine", an expression still in use! Later, February 14th was declared as a day to honor Valentine.

2) Dream up your spouse!

Red roses are considered the flower of love because juggling the letters of the word 'rose' would result in 'EROS', who is the God of Love.

You can thank Alexander Graham Bell for these telephonic wishes. Did you know it was on Valentine's Day in 1876 when he applied for a patent for the telephone? I know what you're thinking, it was probably a co-incidence but so what?

Richard Cadbury invented the world's first heart shaped Valentine's Day chocolate box during the Victorian era in 1822. According to statistics, more than 35 million heart-shaped boxes are sold on Valentine's Day every year. This year, why not make some chocolate with your own two hands for your Valentine?

Whether falling or rising in love, chocolates are undisputed therapy for all pain and joy. Physicians in 1800s used to advise their patients to eat chocolate to calm their pangs of lost love.

8)  Wear Your Heart on Your Sleeve

Show the world what your valentine really means to you, Shakespeare style. According to the tradition in the Middle Ages, young men and women would pick out paper hearts from a bowl with a name on it. The person's name they chose would be pinned to their sleeves for a week in order to show their emotions for them deeply.

The oldest Valentine card was sent in 1415 by the Duke of New Orleans to his French wife when he was arrested in the Tower Of London. It is believed that the 60 love poems he wrote for his wife in this card are the first recorded knowledge of a Valentine correspondence.

If you're anti-Valentine, single and yet to mingle, there's no need to sulk, there's a day dedicated for you too. You can celebrate Singles Awareness Day (SAD) instead. It's an alternative to Valentine's Day for all the happy single people to commiserate in their single status. According to tradition people wear green, as it is considered to be the 'opposite' of red and a common greeting on this day is "Happy SAD!"

Janmashtami 2020: How To Make Parwal Ki Mithai For Bhog (Recipe Inside)
Amazon Freedom Sale 2020: Get All Your Breakfast Essentials At Upto 40% Off