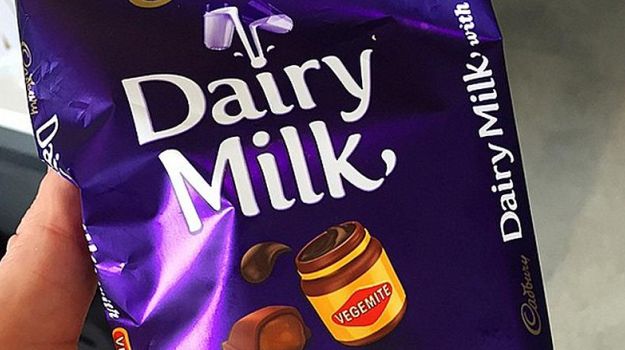 Too salty, too sweet or flat-out just too Vegemite-y? Guardian Australia samples a block of chocolate laced with yeast extract.

Combining Australia’s most beloved breakfast spread with milk chocolate seems like the fever dream of a chocoholic who is looking for an excuse – any excuse – to start the chocolate eating early.

And so at 8.30 on Monday morning the Guardian newsdesk overcame their squeamishness and tasted the new offering from Cadbury – a milk chocolate block with caramel and Vegemite.

But where is the Vegemite?

Thankfully it’s not oozing out of the blocks where the caramel should be. That would be the stuff of science fiction (up there with the alien baby bursting out of Sigourney Weaver’s stomach in Aliens) – and would be a disgusting proposition to even to the most hardcore Vegemite fan.

Instead the addition of Vegemite is much more subtle – apparently mixed more or less evenly through the chocolate, and producing a salty edge to the Cadbury sweetness that is so in vogue today (think salted caramel everything).

The odour of Vegemite – so special, so unique – is still there, but more subtle. You have to hold the chocolate right up to your nose (giving new meaning to the term brown-nose) to get a whiff of yeast extract.

But not so subtle is the snack’s aftertaste. Once the chocolate has evaporated off the tongue and down the throat, a curious taste remains. It doesn’t resemble the beautiful, tangy, salty gloriousness of Vegemite spread on hot-buttered toast, instead it tastes like licking a plate where Vegemite was smeared, many months ago, then left in the sink to fester.

It’s an old taste. And not pleasant. But no matter. It is morning – and there is coffee to wash it away.

So should you try Vegemite chocolate when it launches around Australia in June? (We found the block we’re trying in a Coles supermarket in Manly, Sydney, but officially it’s out in June.) From a business perspective, the marriage of the two ingredients make sense: Cadbury and Kraft, producers of Dairy Milk and Vegemite, are both owned by Mondelēz International – a US food conglomerate. But just because you like – or even love – both passionately and separately doesn’t mean you should combine them.

Here’s the verdict on Cadbury Vegemite from some of my colleagues:

“As both a huge fan of sea salt-flavoured dark chocolate and someone who has grown up eating Straya’s favourite yeast spread with a spoon, this happy little Vegemite was thrilled to get her mitts on two squares of Cadbury’s latest creation.

“The first bite was a surprise; I hadn’t expected to taste both flavours so distinctly and yet simultaneously. The next few nibbles were a thrilling contrast in familiar flavours: the umami hit of the Veg wrapped in the super-sweet Dairy Milk.

“Overall though it ‘ate sweet’ and won a big thumbs up from me. But five minutes later it was a different story. The ‘finish’ was all Vegemite, and not in a good way. An hour later that’s still all I can taste and I feel a bit grubby. Verdict: an entertaining curiosity for the midnight wanderers.” Nikki Marshall

Would be better with dark chocolate

“At first it tastes like normal chocolate but then a hint of saltiness creeps in. It’s quite pleasant until you realise that it’s also filled with overly sweet caramel. It sounds as though it should work, but it’s just too sugary – I imagine a dark, bitter chocolate with Vegemite would work far better. Would not eat again.” Alan Evans

“There is a time and place for Vegemite, and that time and place is on toast or a traditional school lunch sandwich. It is is not ruining an otherwise perfectly good piece of chocolate.” Dave Earley

“I might be out on a limb here but I think it’s a great combo. It’s like salted caramel but with a pleasant yeasty aftertaste.” Patrick Keneally

“Vegemite is the devil’s own work so I had very low hopes for this. All the same, it was more revolting than I’d expected. Chocolate plus evil is still evil, it turns out.” Emily Wilson