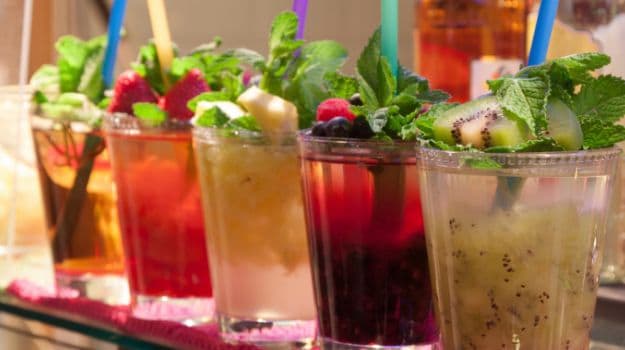 They were once staple items on the traditional British dinner plate, often derided and just as often overcooked. But now the thriving trend for fresh vegetables in liquid form – in juices and smoothies – is taking an unusual new twist and shifting into alcoholic drinks, as quintessentially British garden flavours such as pea, parsnip, mushroom and even celeriac are making their debut in cocktails served in the UK’s most fashionable bars and restaurants.

Jason Atherton’s sky-high City Social bar near Liverpool Street in London has devised a “pealini”, made from salted pea cordial, spearmint, absinthe and prosecco, while the Grain Store restaurant – which chef and co-owner Bruno Loubet insists is “veg-centric” rather than vegetarian – offers a celeriac bellini, horseradish vodka, a sweet potato bellini and a refreshing Campari cooler containing carrot juice on its menu of savoury cocktails.

The Duck & Waffle restaurant and bar serves up a gin cocktail called Mind Your Peas & Qs, and Will of the Woods at the Langham Hotel’s Artesian bar features mushrooms and its Time, Space & Honey has parsnip as a key ingredient.

To reflect the new-found popularity of vegetables, Marks & Spencer , having already tempted its customers’ taste buds with juices of unlikely ingredients such as kale, peas and sprouts, will this week launch a pea and mint vodka. “Pea and mint are two inherently British flavours that work brilliantly together,” Jenny Rea, M&S product developer for drinks, said.

“We were looking at summer trends for inspiration and in the juice world everything green has done really well, from kale to asparagus. We launched an apple, pea, lime and mint juice in January that has done really well so decided to apply it to an alcoholic drink.”

Cocktail experts at some of London’s most fashionable establishments have reported a surge in demand for “sophisticated savoury” flavours in cocktails and have been successfully experimenting with pureed fresh vegetables and herbs combined with alcohol.

Oskar Kinberg, who co-owns the London bar and restaurant Dabbous, agrees that the vegetable smoothie trend has switched to social drinking in bars. “There has been an interesting shift in taste,” he said. “Our customers are definitely getting more experimental and keen to try new combinations, and I think mixologists and bartenders have been keen to reflect the changing palate and offer new flavours.”

Popular drinks at Dabbous include the Shiso Fine, which is a combination of juiced celery, shiso leaves (an Asian culinary herb likened to a citrus-flavoured mint), cucumber and lime and livened up with a splash of tequila. Kimberg also likes to use fresh pea shoots and mint as a winning flavour combination in a twist on the classic mojito, particularly when both are in season and readily available.

Roast the sweet potatoes in the oven for 1 and a half hours at 180–200C in the oven. Once cool enough to handle, remove the skin. Blend the potatoes, water and sugar. Strain through a very fine trough or linen.

Heat the strained liquid and add agar-agar (use 2.5g per 500 ml of strained liquid). Once the puree has set, blend it again. The puree may be frozen. Pour the sweet potato puree into a champagne flute and top with prosecco. Mix gently.