Happy Birthday Vicky Kaushal: The actor recently took to Instagram and shared the picture of his 31st birthday cake with his fans. Much like the actor, his birthday cake is anything but mainstream. 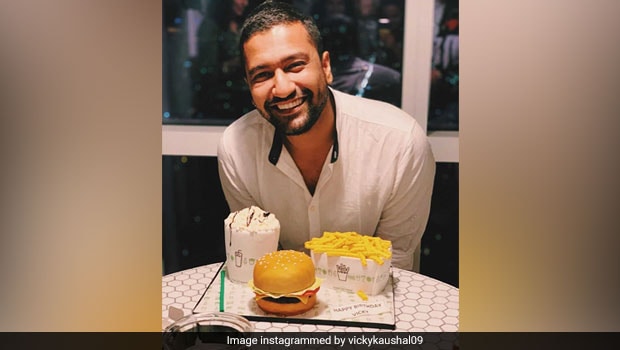 Vicky Kaushal is celebrating his 31st birthday today. The actor, who is currently shooting for Udham Singh and Takht, had a dream run at the box office last year. His performances in movies like Raazi and Manmarziyaan made sure that he was among the most talked-about actors of previous year. The actor also bagged the Filmfare award for the best supporting actor for his role in Sanju. He started the year with a bang too. Uri: The Surgical Strike, became his biggest commercial success till date raking in more than 200 crores at the Indian box office. The movie also announced his arrival in the commercial league. In his next movie 'Takht', the actor would be seen sharing screen space with Ranveer Singh, Kareena Kapoor, Jahnvi Kapoor and Anil Kapoor.

The actor recently took to Instagram and shared the picture of his 31st birthday cake with his fans. Much like the actor, his birthday cake is anything but mainstream. The vibrant cake has a miniature cheeseburger, iced coffee and fries- all of which are covered in vibrant hued fondues. Vicky can be seen grinning in both the pictures, but one can safely say that his cake stole the show here!
"The smile on my face is because of the people you see in the reflection behind. Thank You guys. Also, feeling so damn blessed reading all your wonderful wishes. Thank You so much for this beautiful shower of love and blessings. Lots of love and a big hug to each one of you. And that btw, on the table, was my birthday cake!" he captioned the image .

Vicky may be envied for his fitness and agility but the actor has never shied away from sharing his love for food. In one of his interviews with RJ Mallishka, he said that he is a quintessential Punjabi boy who is fond of all things greasy and good. He even admitted that he can have aloo paratha and butter all his life! Can he get more relatable? We guess not! The actor also had a gala time in Varanasi while shooting for his first feature film as a lead in Masaan. The actor revealed in his interviews that he would love to go back to the city for its food.

(Also Read:' Uri' Actor Vicky Kaushal Was Eating This Delhi Delicacy And We Bet You Are A Fan Too!)

Here's wishing the Uri actor a very happy birthday! May you get to indulge in all your favourite treats!