The viral video shows a woman cutting a birthday cake, in perfect rectangles, without making a mess of the layers or the icing. 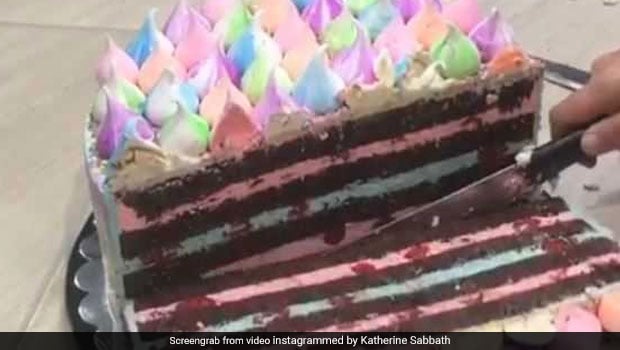 Viral: This video showing an ingenious cake-cutting hack is breaking the internet

Recently a Twitter user had posted a video showing a shockingly easy way of peeling garlic cloves, which had taken the internet by the storm. The video showed a woman poking the cloves with a sharp object and easily removing the cloves from the bulb, without going through the painstaking process of removing the outer covering. The hack had surprised millions of people on the internet, who lamented the fact that they could have saved thousands of man hours that they have probably spent on individually peeling each garlic clove. Now a new hack video seems to have caught the fancy of Instagram users. The video shows a woman cutting a birthday cake, in perfect rectangles, without making a mess of the layers or the icing.

The video was shared on Instagram by Australia-based home baker and cookbook author Katherine Sabbath, who said that the video was originally shot in 2017, but has only now gone viral. Sabbath claimed in her Instagram post that the video has clocked over 100 million views. The video shows a woman using just a cutting board and a kitchen knife to make perfectly straight and proportioned cuts in a round cake.

Also Read: This Twitter User's Unique Way Of Peeling Garlic In 25 Seconds Is Winning The Internet!

Take a look at the viral cake cutting hack video:

Sharing the story behind the old video, which has suddenly gone viral, Sabbath said that the cake in the video was baked by her and that she had asked her friend to cut it "like a grid & into "wedding cake" serving sizes, as there was lots of other food at this staff morning tea." Sabbath said that she was surprised at the kind of response the 'crummy' video was getting and she credited her friend's cake cutting skills for making the video 'break the internet'. The video got scores of comments from food lovers and cake lovers, who said they were concerned over the size of the portions. However, Katherine said that she and her friends had multiple pieces and that everyone could have as many as they liked.

Well one thing is for sure, this cake cutting hack will sure make our lives much easier! What do you think about this hack? Let us know in the comments section below!