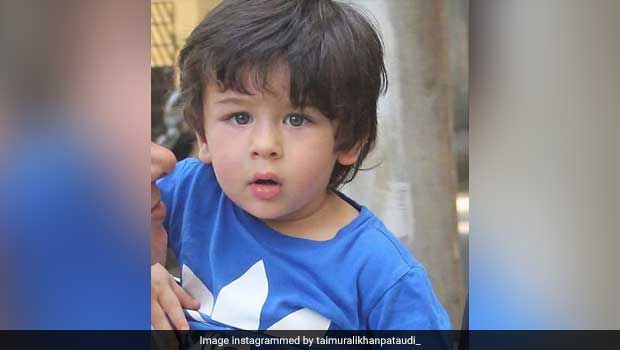 Kareena Kapoor Khan and Saif Ali Khan's son Taimur Ali Khan is a favourite with the paparazzi. The tiny tot's fame has already eclipsed that of his parents and sister Sara Ali Khan, at the tiny age of one. Taimur, who is one of the most avidly followed star kids in India, is going to turn two on December 20th, 2018 and his parents have already kick-started the celebrations with an early birthday bash for him. The birthday party took place on December 7th, with a lot of Kareena and Saif's friends joining in for the bash, along with their kids. Saif Ali Khan's sister Soha Ali Khan's daughter Inaaya Kemmu was also in attendance. Several videos and pictures from the early birthday party for Taimur Ali Khan have been going viral on the internet. While Kareena's friends shared a number of inside pictures from the small get-together, a number of pictures of birthday cakes wishing Taimur have also been doing the rounds.

A Bollywood news Instagram page shared a video of Kareena Kapoor, her sister Karisma Kapoor and Saif Ali Khan, all taking part in Taimur's cake cutting ceremony. The video gives us a peak into the kid's second birthday cake, which appears to be a really cute one, decorated in colourful fondant and topped with what looks like a rainbow. Taimur is seen in the arms of somebody, whose back is to the camera, but we can see his parents Kareena and Saif trying to cheer him on, as the Birthday song plays in the background.

Also Read: "Our Rockstar": Kareena Kapoor Khan's Birthday Cake Is As Stylish As Her! (See Pic Inside)

Meanwhile, another Instagram post showed the kind of amazing gifts that Taimur Ali Khan received on his birthday. In one particular gift hamper containing toys and goodies, a placard says, "Exhausted from the paparazzi", alluding to the amount of attention that little Taimur enjoys from Bollywood reporters and photographers. Another gift was a mini yellow car, which was seen being carried inside during the birthday bash.

Take a look at the gifts that Taimur received on his second birthday bash:

Well, if this was Taimur Ali Khan's pre-birthday bash, we can only imagine what the tiny tot will get treated to on his actual birthday. Taimur is one lucky baby!