Where Do the Supermarkets Get Their Chicken? 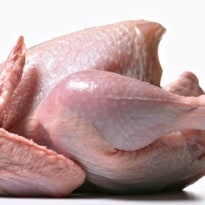 The rates of contamination for each supermarket published on Thursday will be used by shoppers to choose where they buy their chicken, with consumers likely to shun the worst-scoring chains such as Asda. But how much difference is there really between them?

All the big supermarkets buy their fresh chicken from the same handful of processing companies that dominate the intensive farming and abattoir business. Five companies account for 90% of the 17.5m birds slaughtered in Britain each week: 2 Sisters, the largest by far, Moy Park, Faccenda, Cargill, and the much smaller Banham. The first four in the list account for 16.5m chickens a week and supply all the big retailers, as well as chains and fast food brands.

Retailers tend to treat the names of their suppliers as commercial secrets, but the Guardian did a snapshot survey of the market on Wednesday in nine stores in central London to reveal how few sources of chicken there are. The vast majority of chickens in the stores were sourced from these same five companies, whether they were premium or bargain ranges. The handful of exceptions were specialist farm label birds or organic ones, though many organic birds are processed by the big five, too.

The Food Standards Agency is not yet publishing the contamination rates by processor but has said it will do so later when its survey is more complete. It says the way individual supermarkets write their specifications affects how each processing company produces chicken to different orders. and Susannah Savage