Why Should You Consume Jaggery (Gur) in Winter?

A healthier alternative to white refined sugar, jaggery can be used in many Indian desserts leaving a distinct flavour that we all love. 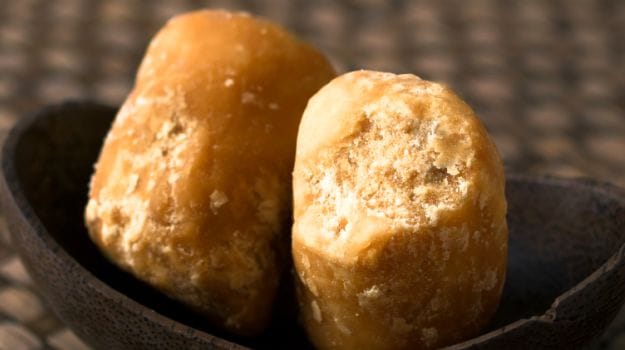 Highlights
You may agree, nothing can beat the sweet flavour of the desi chocolate jaggery or gur right after a hearty meal during winters. Health experts have always pronounced it as one of the best digestives that has numerous other health benefits to boast about. Not only is it known for its excessive iron and vitamin C content, but it has also been used as a traditional remedy for respiratory disorders and throat problems. A healthier alternative to white refined sugar, jaggery can be used in many Indian desserts leaving a distinct flavour that we all love.

How is Jaggery beneficial for health?

Jaggery has certain minerals which are beneficial for the body. These minerals are removed during the refining process to get sugar. The minerals found in jaggery are phosphorus, iron, magnesium, zinc, selenium, potassium and is loaded with antioxidants, which helps to boost the immune system and helps the body fight against diseases. Apart from being an all-rounder, jaggery is known to be beneficial for throat problems too. It reduces the irritation in the throat by creating a soothing layer on the inner lining of the throat and reduces dryness. It dilates the blood vessels in the area and improves blood flow, thus creating warmth in the respiratory tract. Jaggery is normally used with ginger to produce the said effect.

Promoted
Listen to the latest songs, only on JioSaavn.com
(Also read: How to Tell if the Jaggery that You are Buying is Pure?)

Jaggery has certain minerals which are beneficial for the body
It is generally recommended to consume jaggery in winter only as it is known to produce heat in the body. According to Dietitian Sunita Chowdhary from BLK Super Speciality Hospital, "Jaggery is nothing but unrefined sugar and is made by boiling the sugar cane juice until it solidifies. Jaggery is also made from date palm. So, jaggery has similar calories as sugar that is four calories per gram. To keep the body warm we need heat and the heat is produced by the calories from food. That is why jaggery is considered warm as it gives enough calories to keep the body warm. It also helps to dilate blood vessels and produces warmth in the body. It is therefore, said to be beneficial to have jaggery in winters."

(Also read: What is Jaggery and How is it Made?)

It is recommended to consume jaggery in winter only as it is known to produce heat in the body
Does Jaggery really heat the body? What is the reason behind it?

According to Ayurveda, jaggery has a hot potency (or taseer) which actually means that during its metabolism, heat is generated in the body. Each gram of jaggery gives four calories, thereby producing heat in the body. During winters the blood vessels get constricted due to cold weather and jaggery is responsible for dilating the blood vessels and further improves blood flow, thus causing the body to heat up.

While it is good to consume jaggery in winter, it may have completely opposite effects when consumed in hot months. Remember jaggery has the same calorific value as sugar, so exercise caution while enjoying this seasonal delight, especially if you are watching your weight. Ending your meals with a small piece is how we like it best!