Your digestive tract's surface is the size of a studio apartment! 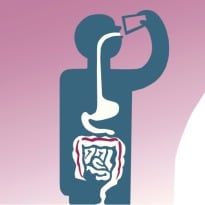 The inner surface of your gastrointestinal tract is as large as a small studio apartment, or between about 100 and 130 square feet, according to a new study.

While that may seem impressive, it's much smaller than previous estimates that put it at between about 600 to 1000 square feet, or as large or larger than a tennis court.

The Swedish researchers used special microscopic techniques to determine the size of the gastrointestinal tract, which is about 16 feet long in a normal adult, but contains many folds and protrusions.

"It may appear to be simply a curious fact, but the dimensions of the inner surface of the gastrointestinal tract are important for the uptake of nutrients and drugs, and the new information will help us understand how the mucous membrane protects the body from harmful factors in the intestinal contents," study co-author Lars Fandriks said in a university news release.

"The gastrointestinal tract is a dynamic system that is difficult to access in the abdominal cavity, and this makes it difficult to measure," he said in the news release. "Since the past measurements were carried out either during post mortems or during abdominal surgery, when the tissue is relaxed, it is easy to obtain misleading measurements."The researchers noted that their estimate is for healthy average adults, and that the actual surface area of the digestive tract differs from person to person and is affected by factors such as diet and lifestyle.

The study was published recently in the Scandinavian Journal of Gastroenterology.