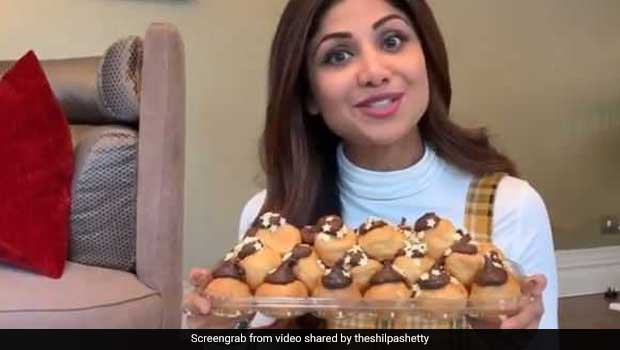 Bollywood's binge queen Shilpa Shetty Kundra is holidaying in London right now, as are a number of our favourite stars. London seems to be a very popular holiday destination among B-town celebrities during winters, and just like every year, a number of Bollywood A-listers will be ringing in 2019 in the UK. Shilpa Shetty is also having chilly pre New Year's celebrations with her family, including her husband Raj Kundra, sister Shamita Shetty, her mother and some of her friends. London is a haven for food lovers, especially those who love chocolate desserts. From warm and soothing hot chocolate to a whole range of decadent chocolate desserts, London is known for winter indulgence. Shilpa Shetty didn't let the opportunity of the London vacation pass her by and celebrated her last Sunday binge of 2018 in style.

Shilpa Shetty Kundra posted a video of herself indulging in a tray full of profiteroles - French choux pastries that have a filling of whipped cream or custard. She topped the profiteroles with molten hot chocolate and bit into those small packages of indulgence, even as we envied the petite actor the ability to eat so much and still remain slim.

Have a look Shilpa Shetty Kundra's last Sunday binge of 2018:

Is anybody else craving a gooey and moist chocolate dessert right now? Shilpa Shetty Kundra may have prematurely ruined the diet plans of millions of her fans by posting this video! If you were wondering exactly how many of these delicious-looking profiteroles the actor actually ate, her husband Raj Kundra revealed it in the comments. An Instagram user commented saying "You don't eat 'em anyway", Kundra replied saying, "Trust me she does ate 3!!" Well, we're pretty sure we wouldn't have been able to stop at just 3! Shilpa Shetty accompanied the video with a caption that thanked her fans and followers for the love and also encouraged everybody to 'live life to the fullest.'

Also Read: Watch: Shilpa Shetty Binges On Bhajiyas And Tells Us How To Burn Those Calories!

Shilpa Shetty also posted a number of more snapshots from her indulgences in London, making us believe that the diva is prolonging her last Sunday binge of 2018 just a little bit. Well a Happy New Year indeed!