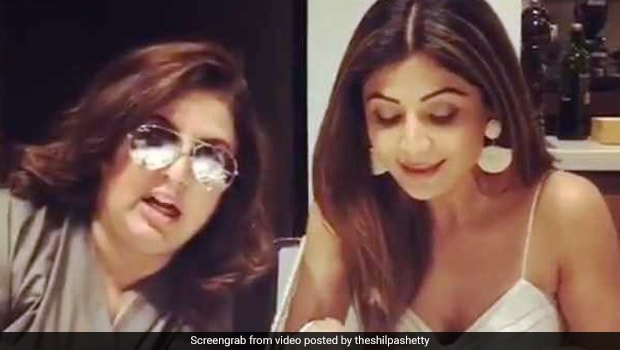 Highlights
Bollywood actor and binge queen Shilpa Shetty is currently vacationing in Europe and we are getting to see her taste a lot of desserts from different countries. Last Sunday, the foodie beauty was in London, where she indulged in a whole range of soft, chewy fudges at the Fudge Kitchen in Windsor. This week, Shilpa has moved to her next destination- Barcelona in Spain and obviously her Sunday binge consisted of a new sinful dessert, which gave us all a serious sugar-high. Joining Shilpa Shetty for her binge session was Bollywood director, producer and choreographer Farah Khan Kunder, who also happens to be in the city, with her three kids. On the menu for Shilpa Shetty's Sunday binge this weekend, was apple crepe tart, with vanilla ice-cream and dulche de leche.

Farah Khan didn't just help Shilpa Shetty Kundra destroy the delectable dessert, but also helped her nail the pronunciation of the phrase 'dulche de leche'. The video will not just make you wish you were friends with Shilpa Shetty, but will also make you laugh; all thanks to Farah Khan Kunder's funny puns and comments on Shilpa's shenanigans. Have a look!

As Shilpa Shetty digs into the delicious-looking dessert, Farah says, "There's no Sunday binge for her, every day is a binge day." Then she wonders out loud, what we have all being wondering all along: "Where does it go?" Given Shilpa Shetty's superbly toned physique and her fondness for all things sinfully sweet, we have also always wondered just how the actor and reality TV judge is able to burn off all of it. It's no easy feat, we believe! This is especially so because Shilpa is a cook, food enthusiast and a celebrated fitness influencer, who frequently advocates healthy diet and exercise. Last Sunday, Shilpa's Sunday binge video with cricketing legend Sachin Tendulkar's daughter Sara Tendulkar went viral.

That looked like fun! Shilpa Shetty is sure enjoying her vacation by indulging in the choicest desserts and treats. However, the beauty has often insisted that she only indulges herself on Sundays and stays off processed sugar and unhealthy foods all throughout the week. Sunday binges are Shilpa's way of treating the foodie in her, for keeping off desserts during weekdays. We'd say, it's complete justified, wouldn't you?