Camphor is a combustible, translucent white solid which has a piquant smell and sour taste. Here are some skin, hair and health benefits of camphor. 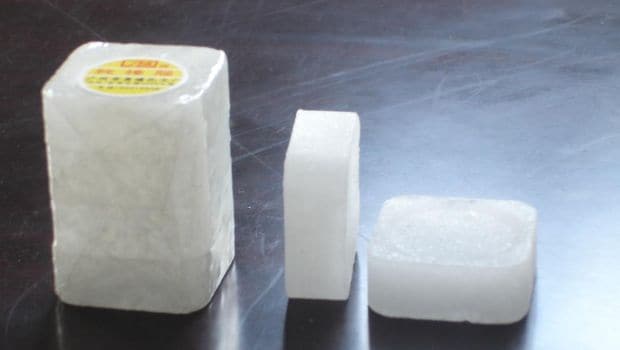 Highlights
Camphor, scientifically known as Cinnamomum Camphor, is a combustible, translucent white solid which has a piquant smell and sour taste, though some people quite like its menthol-like, nose tingling fragrance.

Camphor is obtained from the bark of the tree Cinnamonun camphora. Only 50-years old trees produce a waxy substance which is used as camphor oil. The process of steam distillation is used to extract camphor oil from the stems of the tree. The camphor tree is said to be a native of Hiroshima, Japan. It is evergreen and now grows all over Asia, primarily in Indonesia. The Indonesian variety is named Dryobalanops camphora.

Camphor can be used in multiple ways. It is considered as an important ingredient in vapor rubs, balms and liniments as the oil is said to allay pain and reduce itching. It also helps in keeping cockroaches, moths and other insects at bay from our wardrobe. Camphor is used in religious ceremonies too. Besides, it is beneficial for the skin and hair.

Here are some skin, hair and health benefits of camphor:

On the skin it acts as a counter irritant and is therefore used topically to relieve pain and swelling. It causes numbness of sensory nerve endings of skin, thereby reliving pain and inflammation, and preventing skin redness.

Another skin problem faced by many people is rashes that cause redness. Camphor can help in getting rid of rashes and redness when used as topical itch relieving gels.

How to use: Just dissolve the camphor oil in water and apply it on the affected area for a few days.

Nail fungus or onychomycosis may require treatment by oral anti-fungal, but topical preparations like Vaporub containing camphor oil can be added for faster clearing of the fungus. However, it is effective against onychomycosis caused by Trichophyton mentagrophytes and Candida parapsilosis, which are species of fungi.

Camphor can be used to treat irritated symptoms of eczema in kids and adults. Camphor helps in relieving the pain and inflammation, which is a symptom of eczema. Camphor is also found in many lotions and ointment treatments of eczema.

Fragrance of camphor oil has a calming effect on the mind and brings a good night’s sleep.

How to use: Few drops of the oil can be rubbed on the pillow to induce sleep.

Camphor helps in treating cold and cough and relieves throat congestion. Camphor oil is an ingredient of many vaporub and decongestants.

How to use: Rub some on your chest and back and let it work its magic.

Less hair on the scalp is a nightmare. This could result due to a number of factors, such as improper hair care routine and spending lots and lots of money on chemical loaded hair care products. So, here’s a solution to the problem - use camphor oil. Application of camphor oil on the hair makes it soft and boosts hair growth.

How to use: Mix camphor oil to your regular oil and apply it on the scalp. This will stimulate blood flow to the applied area and promote hair growth.

Camphor oil mixed in bathing water is used for the treatment of Pediculosis capitis or head lice.

Promoted
Listen to the latest songs, only on JioSaavn.com
How to use: Mix powdered camphor tablet in coconut oil and apply it evenly on scalp and hair before going to bed. Wash your hair with shampoo and say goodbye to lice. This is because camphor powder suffocates the lice and hence kills them.