Artificial Sweeteners Can Trigger Diabetes and Cause Weight-Gain 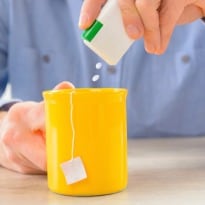 How did people come to think of artificial sweeteners as a healthier alternative to sugar? How did 'low fat' and 'calorie-free' become synonymous with good health? Where did these loyalties come from? In an attempt to find answers to these questions, a team of Israeli researchers did some digging and found something shocking.

Artificial sweeteners don't tackle the problem of diabetes at all, and in fact exacerbate it. They disrupt the body's ability to regulate blood sugar, causing metabolic changes that trigger diabetes. Dr. Eran Elinav, physician and immunologist at the Weizmann Institute of Science in Israel said "Artificial sweeteners are responsible for the onset of the very same condition that we often aim to prevent by consuming sweeteners instead of sugar."

The research was published in the journal 'Nature' and found that zero-calorie sweeteners such as saccharin, sucralose and aspartame can alter the population of bacteria in the gut and trigger high blood glucose levels which can lead to diabetes. Eran added, "The scope of our discovery is cause for public reassessment of the massive and unsupervised use of artificial sweeteners."

The study included a series of experiments, mostly on mice. One group that was fed three artificial sweeteners - saccharin, aspartame and sucralose - developed high blood sugar levels and an intolerance to glucose. When antibiotics were given to cut off gut bacteria, the sweetener effect was restored to normal. Then, the scientists focused on saccharin. They transferred gut microbes from mice fed on saccharin to mice that had no gut bacteria. Soon after that, the second set of mice developed high blood sugar levels. A genetic analysis of the gut bacteria from mice that were fed saccharin revealed that the group behaved differently from others and their system was breaking down more carbohydrates than normal.
Listen to the latest songs, only on JioSaavn.com
After this, scientists ran tests on 381 people who consumed the most artificial sweeteners and found that these people had different gut microbes and were generally heavier and more glucose intolerant than the rest. In the final leg of the experiment, scientists gave 7 people the maximum amount of saccharin that is allowed. Each dose was enough to sweeten 40 cans of diet-cola. At the end of one week they found that 4 people had high blood sugar levels and gut microbes - an outcome similar to what was seen in the mice. Finally they injected bacteria from the human participants into the intestines of mice, only to find that the mice developed an intolerance for glucose, suggesting that the effect was same in both mice and humans.

Elinav, co-author of the study said that "This calls for a reassessment of today's massive, unsupervised consumption of these substances." While the study has been praised for its innovation, many scientists remain unconvinced. Researchers are now hiring more volunteers for a more extensive and ambitious study that will establish a stronger link between artificial sweeteners, diabetes and obesity.