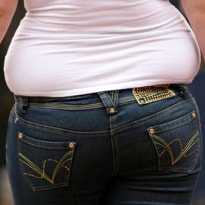 People who are simply overweight, as well as those who are obese, are risking type 2 diabetes, which can lead to blindness, amputations and an early death, the public health body has warned.

Abdominal fat - around the stomach - is a better indicator of your chances of getting it than BMI (body mass index), which is a ratio of weight to height.

In an advisory report to local authorities, who now have responsibility for public health including combating obesity, Public Health England is stating categorically for the first time that excess weight is the biggest risk factor for type 2 diabetes. Some 90% of people with the disease are overweight. Treating people with the disease and its complications - they also risk cardiovascular disease, kidney disease and depression - cost £8.8bn in 2010-11, which is approaching 10% of the NHS budget. Around 23,300 people died prematurely that year because of it.

It is not just about those who are morbidly obese, said Tedstone. "Over 60% of us are at risk of type 2 diabetes because we are overweight," she said. "But overweight has become normalised and many people no longer realise they are potentially endangering their health.

Obesity treatment and prevention is not a mandatory service for local authorities. It is one of many public health issues they can spend ringfenced funding on, depending on the perceived needs of their population. The report from Public Health England, said Tedstone, "is about raising the profile with local authorities, helping them decide how to spend the money."

Obesity services across England are generally thought to be patchy. Although obesity rates tend to be higher in more deprived areas, "it isn't just about the poor," said Tedstone. "In better-off communities it is still a problem."

Barbara Young, chief executive at Diabetes UK, said: "We hope the report acts as a spur to action, as there are now 3.8 million of us in the UK who have diabetes and it costs the NHS £10bn per year. With many millions of people in the UK now at high risk of type 2 diabetes, this is an epidemic that looks likely to get even worse, and if this happens then the impact on the nation's health would be devastating and the increase in costs to the NHS would be unsustainable."

She called on the government to focus more on preventing the disease, by ensuring the NHS Health Check is rolled out and people at risk given the support they need to make changes to their lifestyle - as well as considering making healthy food more accessible through taxation and tougher regulation of the food industry.