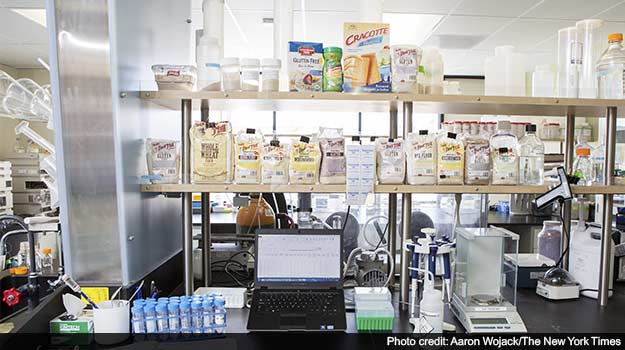 Like many people with a sensitivity to gluten, Kristen Sweet avoids the protein in wheat that can make her sick. But when she eats at a friend’s house or a restaurant, she cannot be certain that the food is absolutely gluten-free.

“There’s this risk every time you do go out and trust your health in someone else’s hands,” said Sweet, 29, who has the gluten-related condition known as celiac disease. “When I do get sick I am curled up in a ball for days and there is nothing I can do. There is nothing you can take.”

Now, however, pharmaceutical companies are racing to develop the first drugs for celiac disease, which researchers say is much more common than previously thought.

No drugs are expected to reach the market until 2018 at the earliest, but a couple of them have shown hints of promise in small clinical trials and might soon advance to the final stage of testing. With that in mind, the Food and Drug Administration held a daylong public workshop recently to discuss something it has not had to ponder before: How to measure the effectiveness of celiac disease drugs in clinical trials.

Most of the drugs in development would not eliminate the need for a gluten-free diet, but would help alleviate symptoms when some gluten does leak into food.

They are being developed mainly by small companies, though some larger pharmaceutical companies are now also showing interest. AbbVie paid $70 million for an option to acquire the global rights to a drug being developed by Alvine Pharmaceuticals. GlaxoSmithKline and Avalon Ventures, a venture capital firm, created a new company, Sitari Pharmaceuticals, which is pursuing celiac treatments.Drug development has lagged, experts say, in part because the illness was once thought to be a rare condition among children. In the last 15 years or so, however, studies have found that around 1 percent of the population, both adults and children, have the disease, meaning it affects about 3 million Americans.

But most of them do not have a diagnosis, in part because the symptoms - which include abdominal pain, bloating, diarrhea, headaches, fatigue and cognitive problems - can have many other causes. And not all gluten sensitivity is related to celiac.

Celiac is now believed to be an autoimmune disease, in which the body’s immune system attacks its own tissue, particularly the lining of the small intestine, through which nutrients are absorbed.

The attack is triggered in genetically susceptible people by gluten, a protein in wheat, barley and rye that imparts favorable properties for cooking but which cannot be readily digested.

“It’s the first autoimmune disease for which the antigen was identified,” said Dr. Francisco Leon, co-founder of Celimmune, a new celiac drug development company. He said celiac disease might serve as a test bed for drug companies developing products for autoimmune diseases because it is easy to get a quick read on whether a drug works by feeding people gluten.

It also suggests drugs for other autoimmune diseases might work for celiac disease. Celimmune licensed rights to a drug Amgen had tested for rheumatoid arthritis and will study it for hard-to-treat cases of celiac disease.

The advent of the gluten-free diet has been a major advance for those with celiac disease, but it is not a cure-all. One study, for instance, showed that the small intestines of two-thirds of adults were still damaged two years after starting a gluten-free diet.

That could be because it takes time to heal. Or it could be that people are still being exposed to gluten that seeps into food in small amounts. Gluten can also be in lipstick, prescription drugs and other places that might not be expected. And adhering to the diet can be difficult for some people, specialists say, particularly teenagers who want to have pizza with their friends.

“There’s a whole degree of anxiety and social isolation that comes along with this,” said Dr. Daniel A. Leffler, director of research at the Celiac Center at Beth Israel Deaconess Medical Center in Boston, who has been a consultant to companies developing celiac drugs.

Alvine’s drug, ALV003, consists of two enzymes that are meant to break down gluten before it can get into the small intestine and cause a reaction. The drug is a powder dissolved in water that is taken before meals.

Christina Buettner, who participated in a study of ALV003, said she did not notice any difference in how she felt, though she does not know whether she got the drug or the placebo.

Buettner, a nurse in the Boston area, said having to drink 8 ounces of the same fruit-flavored liquid before every meal “got kind of old,” but she would be willing to do it if the drug was shown to reduce the long-term damage from the disease.

Both she and Sweet, who lives in the Philadelphia suburbs, said that ideally they would only take a drug like ALV003 before meals that they could not be sure were gluten-free.

There are also nutritional supplements already on the market that claim to break down gluten.

These supplements do not have to be approved by the FDA and some celiac specialists said there is little to no evidence that they work.

BioLineRx, an Israeli company, is in early-stage testing of a polymer that binds to a key part of the gluten protein, preventing it from being absorbed in the small intestine. And Alba Therapeutics, a privately held company in Baltimore, has done midstage trials of a drug, larazotide acetate, that is supposed to prevent gluten from squeezing between cells of the lining of the small intestine and setting off an inflammatory reaction.

In a Phase 2 trial, the lowest dose tested reduced symptoms compared to a placebo. But Teva Pharmaceutical Industries, which obtained an option on larazotide acetate when it acquired another company, has decided not to license the rights to the drug, a Teva spokeswoman said. Alba, which declined to be interviewed, is apparently searching for money to move the drug into late-stage testing.

At least one company, ImmusanT, hopes to do away with the need for a gluten-free diet, allowing people to eat what they want. It thinks that injecting people over several weeks with the pieces of gluten that provoke an immune reaction will induce tolerance to gluten, somewhat similar to the way allergy shots work.

Some experts consider this a long shot.

As a discussion at the recent FDA workshop made clear, assessing the effectiveness of celiac drugs can be difficult because the disease affects people differently. There is not a clear correlation between symptoms and damage to the intestine. Ideally, some participants said, a drug would both improve symptoms and heal the damage while also preventing long-term complications like bone loss.

Who should get the drugs would be another question. If a drug comes to market, especially an expensive one, insurers might limit the drug to those with a definitive diagnosis obtained by inserting an endoscope down the throat into the intestine to examine it and take a biopsy.

“I expect we will need an actual diagnosis of celiac disease, not just gluten sensitivity,” said Dr. Sheila E. Crowe, a gastroenterologist at the University of California, San Diego.

Right now, gluten-free foods have become popular even among those without celiac disease or sensitivity. This rankles some people with celiac because they think it trivializes their illness.

Listen to the latest songs, only on JioSaavn.com
Alice Bast, founder and chief executive of the National Foundation for Celiac Awareness, a patient advocacy group, said the introduction of drugs would help society and the medical community take the disease more seriously, leading more doctors to screen patients for the illness. Bast, who had celiac diagnosed 21 years ago, said it took her eight years to find out she had celiac disease after visiting 22 doctors and experiencing symptoms including migraines, hair loss, broken teeth, debilitating diarrhea and three miscarriages.

“With drug development there will be better medical awareness,” she said. “There will be disease management rather than self-management.”