Daily Intake of Fruits and Vegetables Can Improve Your Mental Health 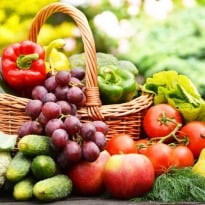 Health experts and nutritionists have always stressed on the importance fruits and vegetables in our diet. They replenish our body with essential vitamins and minerals, aid in building resistance and strengthen immunity. According to recent study conducted by the University of Warwick's Medical School, low intake of fruits and veggies can not only affect your physical health but also your mental your well-being. (Eat 5 Portions of Fruits and Veggies for a Better Heart)

The study was published in the BMJ Open and it states that daily intake of fruit and vegetables can contribute a great deal to your mental health and well-being. It was found that those who consumed at least five portions of veggies and fruits enjoy high mental well-being when compared to their counterparts who only had one portion. Low mental well-being has traditionally been linked to mental illness and mental health problems. On the other hand, high mental well-being translates into a state where you feel good and function well throughout the day.

"Mental illness is hugely costly to both the individual and society, and mental well-being underpins many physical diseases, unhealthy lifestyles and social inequalities in health. It has become very important that we begin to research the factors that enable people to maintain a sense of well-being," co-author Professor Sarah Stewart-Brown said."Our findings add to the mounting evidence that fruit and vegetable intake could be one such factor and mean that people are likely to be able to enhance their mental well-being at the  same time as preventing heart disease and cancer," said Stewart-Brown. For their research, the experts closely analysed the data from a health survey that was conducted in England and included almost 14,000 people aged 16 and above.

The findings showed that almost 33.5 per cent of respondents with high mental well-being ate five or more portions of fruit and vegetables daily as opposed to 31.4 per cent who ate three to four portions, 28.4 per cent ate one-two and a mere 6.8 per cent ate less than one portion of fruits and veggies every day.

"The data suggest that higher an individual's fruit and vegetable intake the lower the chance of their having low mental well-being," explained the lead author,  Dr Saverio Stranges.