Dolphin Proteins May Prove to Be Beneficial for Human Health 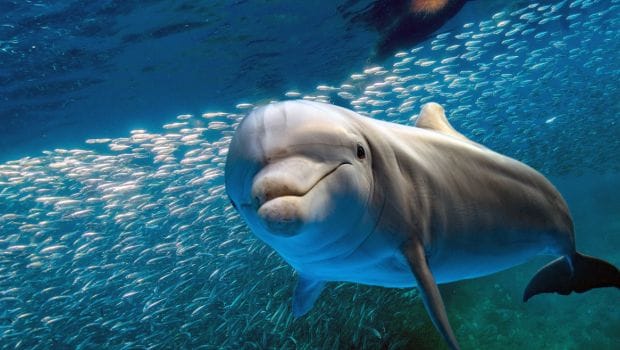 Highlights
Dolphins are often portrayed as heroes who save humans through remarkable feats of strength and tenacity, in movies and TV shows. The bottle-nosed joyful creatures have always been a center of attraction for humans. Dolphins are playful, friendly and loved by everyone. Why would you not love these adorable creatures? In case they still look dangerous and are repelling to you, here is another reason to fall in love with them. Dolphin's genome may help in treating common diseases suggests a new study. Researchers said, mapping all the proteins found in the dolphin genome could pave the way for finding a new way to treat some common diseases that affect humans.

Ben Neely, National Institute of Standards and Technology (NIST) US, said in a statement, "Dolphins and humans are very, very similar creatures." Neely, along with his colleagues who created a detailed, searchable index of all the proteins found in the bottlenose dolphin genome added, "As mammals, we share a number of proteins and our bodies function in many similar ways, even though we are terrestrial and dolphins live in the water all their lives."

A genome, which is the complete set of genetic material present in an organism, is mapped in order to study the protein structure in dolphins. A detailed map of the bottle-nosed dolphin genome was already first compiled in 2008, while a recent technological breakthrough enabled the creation of a new, more exhaustive map of all of the proteins produced by the dolphins' DNA. Comparing the proteins of humans with these mammals is already providing researchers a wealth of new information about the working of human body. More precise treatment methods for common medical problems might be developed by this new research.

Studies recently revealed a protein, known as vanin-1, which may help the marine mammals to protect their kidneys. While humans produce relatively less amounts of vanin-1. Researchers will gather more information on whether or not elevating levels of vanin-1 may offer protection to kidneys.Mike Janech, Medical University of South Carolina said, "There's this gap in the knowledge about genes and the proteins they make. We are missing a huge piece of the puzzle in how these animals do what they do." According to the researchers, there may be hundreds of other similar applications, including some related to the treatment of high blood pressure and diabetes. While vanin-1 is just one example of how genomic information about this mammalian cousin might prove useful.

Researcher Neely explained, "Once you can identify all of the proteins and know their amounts as expressed by the genome, you can figure out what's going on in the bottlenose dolphin's biological systems in this really detailed manner." He added, "It's amazing to think that we are at a point where cutting-edge research in marine mammals can directly advance human biomedical discoveries."