Drinking Water After Eating Watermelon: Is it Safe or Not? 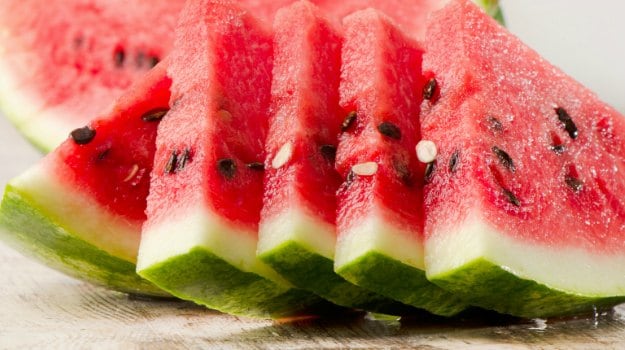 Highlights
It is the season of watermelons. The sweet delight has filled the carts of all fruit sellers in town, and we couldn't be happier. Apart from being an extremely hydrating fruit, watermelons pack a number of health benefits. Shilpa Arora, Macrobiotic Nutritionist and Health Practitioner, shares, 'Watermelons contain lycopene, potassium and a lot of other nutrients. It has fiber that keeps the digestion process going.'

According to the book Healing Foods by DK Publishing House, citrulline, an important amino acid found in the flesh of watermelons, can stimulate the production of nitric oxide which regulates blood pressure and enhances the blood flow. So, it's definitely worth adding this juicy, seasonal fruit to your summer diet plan. You can add it to salads or juice it up, there are number of ways to use watermelons and at the same time a number of myths surrounding them. A lot of people suggest that you shouldn't drink water after having watermelons. We set out to explore if this suggestion holds any truth and here's what we found.

Some believe that watermelons contains 96 percent water and so, there is no need to drink water after consuming them as it may hamper your digestive system by diluting the digestive juices. Others feel that since watermelon mostly contains water and sugar in the form of fructose drinking additional water after consuming it may put you at the risk of stomach infections.According to Ayurveda, certain food combinations disturb the normal functioning of the gastric fire and upset the balance of doshas in our body. In his book, Ayurvedic Home Remedies, Dr. Vasant Lad makes a suggestion for all kinds of melons, ''eat them alone or leave them alone''. Bangalore-based Nutritionist Dr. Anju Sood also advises against drinking water after eating watermelons. She says, "It can affect your gastrointestinal tract. Watermelon is mostly water, sugar and fibre. Microbes or bacteria need water and sugar to develop and expand. So, if you drink water after having watermelons, there are more chances of the microbes spreading across your GI tract."

According to Shilpa Arora, Macrobiotic Nutritionist and Health Practitioner says, “Since watermelon is in itself full of water, it makes no sense to have water after eating it. Ayurveda recommends that we avoid water or in fact any food with watermelon. When watermelon is eaten along with other foods, it slows down the absorption and digestion process in our stomach leading to an acidic tummy. Some people with a sensitive stomach experience uneasiness when they drink water with the fruit. So, it is best avoided, however, there is not enough scientific evidence to prove that watermelon and water are not compatible."

Enjoy the lovely fruit in a smoothie, in a salad, or just tuck into it raw. Whether or not this myth is true, it is definitely not a reason to avoid watermelons. So, feel free to indulge and perhaps avoid drinking water as a precautionary measure.