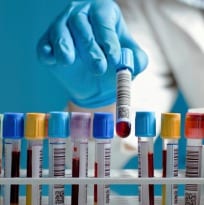 Scientists have identified two gene mutations that are associated with increased risk of
developing eating disorders.

The study also showed that the two genes interact in the same signalling pathway in the brain, and that the two mutations produce the same biological effect.

The findings suggest that this pathway might represent a new target for understanding and potentially treating eating disorders.

Researchers found that mutations that decrease the activity of a transcription factor - a protein that turns on the expression of other genes - called estrogen-related receptor alpha (ESRRA) increase the risk of eating disorders.

In the new study, 20 members from three generations of one family (10 individuals affected by eating disorders and 10 unaffected), and eight members of a second family (six affected and two unaffected) were analysed.

The gene discovered in the larger family was ESRRA, a transcription factor that turns on the expression of other genes. The mutation associated with eating disorders decreases
ESSRA activity.

The gene found in the second family is a transcriptional repressor called histone deacetylase 4 (HDAC4), which turns off transcription factors, including ESRRA.

This mutation is unusual in the sense that it increases the gene's activity - most mutations decrease or destroy a gene's activity. Importantly, the team also found that the two affected
proteins interacted with one another; HDAC4 binds to ESRRA and inhibits it.

The two genes are already known to be involved in metabolic pathways in muscle and fat tissue. They also are both regulated by exercise.

In the brain, HDAC4 is very important for regulating genes that form connections between neurons. However, there's almost nothing known about ESRRA in the brain, although it is
expressed in many brain regions that are disrupted in anorexia.

Scientists now plan to study patients with eating disorders and see if other genes associated with the ESSRA/HDAC4 brain pathway are affected in humans.

Comments The study was published in the Journal of Clinical Investigation.