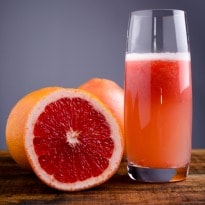 A glass of grapefruit juice a day could indeed boost the efficacy of cancer drugs, check their side effects and also reduce the cost of the medication, according to a study.

Combining the fruit with a specific anti-cancer drug delivered the same benefits as patients would have from taking more than three times of the medication by itself.

University of Chicago researchers said the combination could help patients avoid side effects associated with high doses of the drug and reduce the cost of the medication, the journal Clinical Cancer Research reports.

Grapefruit juice is known to prevent enzymes in the intestine that break down certain drugs, meaning more can enter the blood stream, according to the Daily Mail.

Doctors often tell patients to avoid some fruits when taking particular medications as it can cause serious side-effects or overdose.

Scientists now wanted to see if they could harness this effect. Study leader Ezra Cohen said: "Grapefruit juice, and drugs with a similar mechanism, can significantly increase blood levels of many drugs."

"But this has long been considered an overdose hazard. Instead, we wanted to see if grapefruit juice can be used in a controlled fashion to increase the availability and efficacy of sirolimus," added Cohen.

Listen to the latest songs, only on JioSaavn.com
Sirolimus or rapamycin is used to prevent rejection in organ transplantation but is also being tested as a treatment for certain tumours. The Chicago team showed that patients who drank eight ounces of grapefruit a day increased their sirolimus levels by 350 percent. Certain substances in grapefruit juice are known to stop an enzyme in the small intestine from breaking down some medications.

Comments This allows more of the drug to enter the blood stream, and could at one level cause serious side-effects or accidental overdose.