Green juice: Drink Your Way to Five a Day 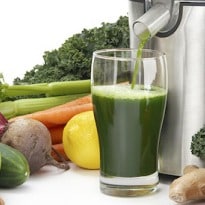 Juice made from green leafy vegetables is the latest health-food trend. Is it really good for you, or just an expensive fad?

Move over flat whites. A drink with the colour and consistency of Labyrinth's Bog of Eternal Stench is stealthily emerging as the nation's must-slurp beverage: green juice. Drinks made from leafy green vegetables are popping up on supermarket shelves (Sainsbury's, Waitrose and Whole Foods all now stock branded green juices), in juice bars such as Crussh, in recipe books (thanks Gwyneth Paltrow) and on Instagram, currently clogged with #greenjuice selfies. Meanwhile, New York is experiencing a "juice bar brawl" as a flurry of brands each claim their juice is the healthiest.

While vegetable juice is nothing new, with the likes of V8 and carrot juice doing the rounds for years, green juicing uses large quantities of leafy veg and brassicas such as kale, spinach, chard and broccoli. The other main difference between (fresh) green juice and traditional vegetable drinks is the technique - cold-pressing, where the juice is extracted by a method of crushing and pressing. Traditional centrifugal juicers, the type usually sold in Britain, use fast-spinning blades that heat up as they whir, thus, cold-press converts say, oxidising and therefore destroying some of the nutrients in the juice. Clare Neill, co-founder of juice company Radiance Cleanse, says juice from a centrifugal machine "oxidises faster because so much air has gone through the juice while it's being made."

Fresh green juice wins health points over packaged fruit juice and smoothies on several counts. First, most fruit juices sold commercially in the UK are pasteurised. Nutritionist Vicki Edgson says: "They're heat-treated so they have a longer shelf life and no bacteria, but this means unfortunately a lot of the nutritional value is knocked out." Second, green juices contain much less sugar than their fruity counterparts. Third, there is a range of nutrients present in those dark green vegetables, the ones we're always being told to eat more of - kale is packed with beta-carotene, calcium, vitamin C and vitamin K.

So is drinking a glass of green juice as good as eating the vegetables? Not quite. Registered dietician Iona Taylor says: "You'll get the vitamins and minerals but not the fibre. And the soluble fibre in vegetables is really good for your cholesterol and blood pressure." There is a potential way around this problem. Edgson suggests avoiding both standard centrifugal AND cold-press juicers, and using a powerful blender instead: "When you pulverise or blend with a Vitamix or similar blender, you get the benefits of the fibre as well. The blades go through everything."

Both Edgson and Taylor say there are some people who should approach green juice with a little caution. Edgson checks clients aren't on anti-depressants or blood-thinning medication such as Warfarin, and is also "a little wary when women are in the first trimester of pregnancy." This is because "many of the ingredients that go into a green juice speed up detoxification through the liver," she says. "I don't want to exacerbate the moving through the system of those medications faster than they are designed to do."

But for the rest of us, green juice seems an easy way to add more leafy veg to our diets. "You can put a lot more in a juice than you could sit and eat," says Edgson. But how palatable is a big glass of cabbage? I spent a week finding out.

I kicked off with a mini juice fast from Radiance Cleanse, with six 500ml bottles for the day. The juices were delicious. Alka Green - courgette, spinach, broccoli, fennel, apple and lemon - tastes zesty and vital, with no hint of broccoli or spinach. I spent the day hovering between the sofa and loo, though, and missed lovely, carby, solid food, so for the rest of the week, I incorporated green juice into my regular diet instead. I borrowed a Hurom cold-press juicer from Lakeland. It looks like the Starship Enterprise and costs an eye-watering £299, but by golly, it juices them brassicas good. I followed La Paltrow's green juice recipe: kale, mint and an all-important apple. It's really tasty.

Green juice is also surprisingly filling. I drank it mid-afternoon and found it alleviated 4pm snack cravings. I experimented with spinach, spring greens, cavolo nero. In juice form, none taste like the vegetables in question. And most likely it was psychological, but I felt healthier and more energetic, too. The biggest stumbling block is the cost of the equipment. Is using a standard £25 juicer worth doing? "Definitely - 100%," says Neill. Just drink it straight away, rather than storing it in the fridge, and bear in mind "they're not as good at juicing leafy greens, so you'll need to juice more to get the same volume."

So now I've found an affordable compromise, my new green juicing habit is here to stay. Kale and spinach to go, please.