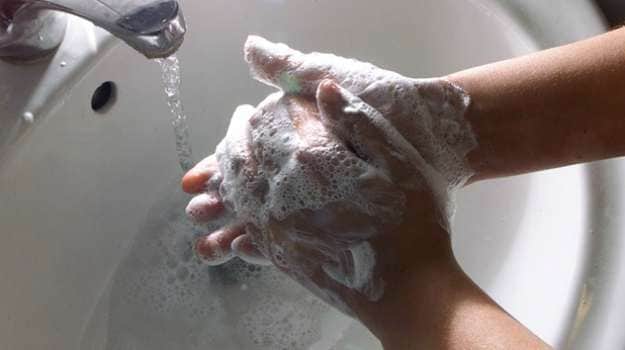 Adults who were given access to online advice saw a 15% to 25% reduction in infections compared with the control group. Photograph: Graham Turner for the Guardian

The trial of an online scheme that educates adults about proper hand-washing techniques has offered the first conclusive evidence that washing your hands makes a difference in reducing infection.

You don't only protect yourself, you also protect your family members, and presumably your colleagues as well

While hand washing has been accepted as important for reducing the spread of viruses and infections for many years, a three-year study involving more than 20,000 British adults, the results of which are published on Friday in the Lancet, is the first large-scale randomised test to confirm that increased hand washing leads to lower rates of infection among adults.

"Until this trial it wasn't really clear whether hand washing really did work. We had evidence from other settings [notably studies conducted in developing countries and a study of very young children in Australia], but not in a westernised setting among adults," said lead researcher Paul Little, professor of primary care research at the University of Southampton.

The trial found that adults who were given access to the online materials, which asked them about their hand-washing practices, and provided education on the spread of germs and viruses, and information about the most important times to wash their hands, saw a 15% to 25% reduction in infections compared with the control group.

Related: Guy Dammann: What is it with not washing your hands?

The group who were educated about the importance of hand washing increased the average number of times a day they washed their hands from six to 10 times. They went on to report lower infection rates for acute respiratory, influenza-type and gastronintestinal illnesses. They were also 10% less likely to pass on these infections to other members of their household. When the group who had seen the campaign did get an infection, they reported a shorter duration of the illness (9.2 days) than the control group (10.6 days).

"I think people might be a little bit unsure that washing your hands might really be effective in preventing transmission, there's a bit of skepticism about that. But we now know that is the case. I think one of the striking things is you don't only protect yourself, you also protect your family members, and presumably your colleagues as well," said Little.

Related: How Britons learned to fight off infection, but now die from heart disease and cancer

A similar hand-washing education campaign made available to the wider public could lessen the burden on the NHS during winter months, suggest the study's authors, as the trial found that those who had seen the reminders about hand washing reported 10% fewer visits to their GP each year. They also required fewer antibiotic prescriptions, which Little said was a very significant finding due to current attempts to reduce antibiotic use.

The study also suggested that online campaigns to encourage hand washing could be useful in the event of a pandemic, as the internet is the first place people turn for information at the outbreak of a pandemic, and it is crucial to change people's behaviour in order to slow down the spread of infection.