Just What We Need, A Smart Belt That Tells Us We've Eaten Too Much 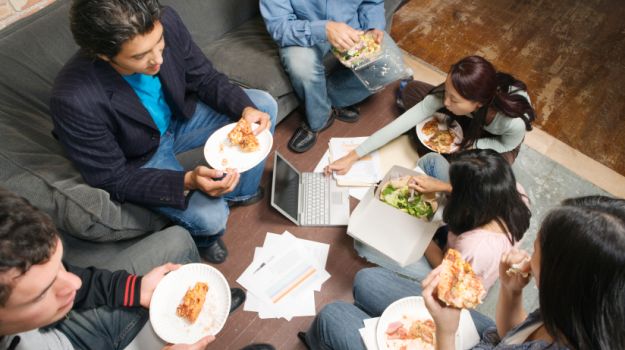 Highlights
Your belt already has a built-in mechanism that prevents overeating: When you've had too much, you have to loosen it. But the makers of an upcoming smart belt dubbed the "Welt" - short for "Wellness Belt" - want to take that to the next level.

The Welt relies on a magnetic sensor to track waist size. It also tracks the belt's tension to determine when users may have overindulged. "Based on calorie intake, your waist can expand and contract over a duration as short as half an hour," the product's Kickstarter page says. "WELT keeps track of these rapid variations in waist size to monitor patterns of overeating."

The belt comes with a smartphone app where users can review how their waistline has changed over time and when the smart belt thinks they had a little too much. The device also tracks some non-waist data, including the number of steps taken and time spent sitting each day. That data is available through the app, along with "tips and warnings for your health," according to the Kickstarter page.

Although it's true that waistlines (and weight) can change dramatically even in a single day, just judging the tension of a belt may leave out important context and unnecessarily alarm users, according to Scott Kahan, the director of the National Center for Weight and Wellness. After all, your belt could buckle after you've chugged a big glass of calorie-free water, not just after you've had too many fries, Kahan noted.

Welt's creators, the Welt Corp., said the belt uses an algorithm based on digestion time to tell the difference between when you've chowed down versus just drank a lot of water. "Users can also manually input and modify the number of times they've overeaten per day" in the app, the company said in an emailed statement.There is a real health argument for keeping tabs on your waistline: Self-monitoring is a "core concept" to many weight management strategies, according to Kahan, and the extra calories people eat often turn into fat that clings around the waistline. According to the Centers for Disease Control and Prevention, those love handles can place people "at greater risk for developing obesity-related conditions, such as Type 2 Diabetes, high blood pressure, and coronary artery disease."

Smart belts that track health information aren't a totally new idea, but the Welt seems to be closest to reaching mass-market status. It was originally designed as part of an internal innovations program at Samsung, but now Welt has spun off with some seed money from Samsung's venture capital arm and turned to crowdfunding. Welt Corp. has raised more than $63,000 on Kickstarter - blowing past its $30,000 goal with a month to spare.

Promoted
Listen to the latest songs, only on JioSaavn.com
Products like the Welt are also a reminder that more mundane items are getting connected to the Internet or apps. But some experts warn that the rush toward the so-called Internet of Things is creating more and more data that could leave users' privacy exposed in ways they wouldn't expect.

For instance, your waist measurement may have been a well-guarded secret between you and your tailor in the past. But with something like Welt it will be carefully, digitally tracked - and once data exists in the cloud somewhere, there's always the threat that it could be revealed.