Now We Can't Eat Protein. What Can We Eat? 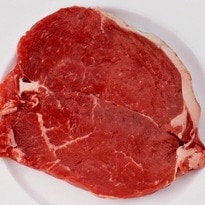 This week a new report said that a diet high in animal protein could increase our chances of dying from cancer or diabetes fourfold. So if protein has joined sugar, fat and carbohydrate in being bad for us, what's left for dinner?

When my father died of secondary liver cancer, they didn't have time to find the primary, but assumed it was in his bowel. My stepmother was pleased because she said: "At least nobody can say he drank too much" (to which I replied: "Yeah, unless they'd met him"). On the assumption that it did start in his bowel, we agreed that if there had been any fault at all in his lifestyle, it would have been eating too much red meat. This was in 2004, but the link between red meat, especially processed meats, and cancer of the bowel had been well-established for some time. And who can blame a man for eating too much red meat? You might just as well blame him for singing too loudly in the bath; it's part of what it is to be an exuberant human, living in fortunate times.

This week, it transpires that red meat doesn't just cause bowel cancer, but all cancer, as well as heart disease, strokes, almost anything you could file under "early death". High levels of protein from any animal - nay, any animal source - have been linked (in people under 65) to a fourfold increase in their risk of death from cancer or diabetes, and a near doubling of the risk of dying from any cause over an 18-year period.

Vegans took obvious pleasure in this, the way they can take pleasure in being right in almost all situations, dietary, moral and environmental. But it has piquancy for everybody, starting with a simple reversal of orthodoxy. Red meat, apart from the small matter that it is a carcinogen, has been popular with faddists and weight-loss gurus, as has all protein. The quest for dietary perfection has centred on avoiding carbohydrates, especially refined ones. (I like the way that refinement and process are now basically bywords for nutritional toxicity. In your face, art.)

While the Atkins diet in its strictest sense has been on the slide, mainly I think for being too old for fashion, and for the sheer senselessness of all that cheese, the very-high-protein credo has hung on in other forms, currently the Paleo diet. It's a lot like the Atkins, except you're not allowed diet cola. "Yuk! That disgusting aspartame backtaste!" Paleolithic man would have said, if any of us can say for certain what he truly thought. Often characterised as the Anna Wintour 2.0 (famously, she used to have a steak with béarnaise sauce every lunchtime, and never ate anything else), this basically involves, again, a lot of protein, mostly mackerel, judging from the pictures, along with some nuts.

But if all these diets are doubling our chances of dying, should we be worried? First, no, because very few of us stick to them. All those decisions that weren't really decisions - Oh, go on then, a muffin if you absolutely insist - are instantly vindicated, while perfectionists can be derided and laughed at, and will eventually die of their perfectionism. Second, the overwhelming impression is that, if proteins from animals are no good for you, which almost all of them are, then what are we supposed to eat? Who's to say that this era isn't as mistaken as the last? Who's to say that any advance has any meaning? Why don't we just eat what we like! Loads of it. Less of it. Who cares? Who knows! Nobody.

But there are a couple of tiny things to flag up, before we go any further along the path of quasi-nihilism. First, dietary orthodoxy is not the caricature I portray above, but rather a patchwork of evidently sensible rules that people would probably have recognised since before the war. Jennifer Irvine, from the Pure Package (a meal delivery service beloved of the sorts of people for whom Gwyneth Paltrow is an ego ideal), describes balance thus: "We believe in a totally balanced diet, we've never given our clients more than one portion of red meat a week. That's what we've advised for the last 10-plus years. It's not news. There are certain proteins that we absolutely love, like eggs. But again, we still wouldn't use them more than once a day or once every couple of days. We use a lot of legumes and beans. The most important thing for health is portion control and variety. Whenever I see people getting obsessed with one particular type of food, whether that's meat or carbohydrates, I generally take a step back from it. It's not as simple as that, and never has been."

So the people we think of as protein-loons were always eating other stuff beside it. They are still going to live longer than you. In a longitudinal population study I've been doing, I have demonstrated that just knowing how to pronounce "quinoa" extends your life expectancy by 12 years.

But the overriding fact in all this is that this new study is wrong: the US data set from which it is drawn is fatally flawed and the link between protein and premature death is simply not demonstrable from this evidence. Jack Winkler, former professor of nutrition policy at Metropolitan University, explains: "They did a correlation between the national diet survey in the United States (NHANES), and some data on death by disease. They linked it up, then alleged that protein caused death. Now, NHANES suffers from what all diet surveys suffer, namely: you ask people what they eat and what you get back is lies. People respond normatively. They put themselves in the best possible light. They're not harmful, deceitful lies. In the case of the British survey, people underreport how much they eat by 25% and adolescents by 30%. Underreporting they call it, but in plain English, it's lies."

A study has just been published on what's wrong with NHANES, which concludes: "Across the 39-year history of the NHANES, EI [Employment Insurance] data on the majority of respondents (67.3% of women and 58.7% of men) was not physiologically plausible." In plain English, if they really ate what they said they'd eaten, they would no longer be alive. In two-thirds of cases.

Winkler continues: "The practical consequence for the protein story is that you've got a correlation between food intake and disease, but the food intake data is so poor that any correlation is suspect. Academics sit in front of a computer screen and do data analysis. But they never question the quality of the primary data. I'm not being rude, but my attitude towards that study is contempt."

What does all that mean? Ignore experts? Listen to them selectively, according to your mood? No: be as you were. Forget protein. Concentrate on sugar. Winkler concludes, trenchantly: "Sugar is the issue of 2014. It's going to continue to be the issue of 2014. We should talk about why taxes will not work. We should talk about what we ought to do instead."