Parents are Warned to Steer Clear of Sugar-Filled 'Healthy' Drinks 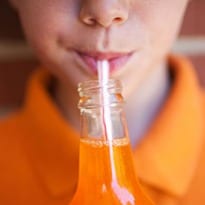 Nutritionists and health campaigners are calling on parents to avoid supposedly "healthy" fruit drinks during the hot summer - asking them to give thirsty children plain water or milk instead.

The calls come as new health research puts sugary drinks, and particularly the fructose in them, at the heart of the "diabesity" epidemic affecting young people in Britain. Some 67 health charities, medical royal colleges and public health bodies are asking the government to consider a health tax on sugary drinks, along the lines of those already successfully introduced in France and four other European countries.

But the campaign group Sustain, which leads a consortium of organisations campaigning for legislative action on children and sugar, told the Observer that the government had shown no interest. The Treasury refused to comment on Sustain's January report, which set out the case for taxation of added sugar in food and drink, while the Department of Health merely referred its copy on to the Treasury, saying the issue was "not within its remit".

"Parents' best efforts to encourage their families to eat healthily are undermined by cynical multimillion-pound marketing strategies that present sugary drinks as fun and fashionable," said Sustain campaigns director Charlie Powell. "As government chooses to ignore the science that clearly classifies sugar as toxic, it's no surprise that public health policies fail to protect children."

Many "healthy" drinks, such as Robinson's My-5 Fruit Shoot, especially targeted at parents and children, contain nearly as much sugar as Coca-Cola. The 200ml Fruit Shoot bottle provides 40% of total sugar a child under the age of six should consume in 24 hours. Yet labelling calls the drink "healthy" and provides only adult dosage guidelines. Manufacturer Britvic says the labelling complies with current regulations.

Children in Scotland consume more sugar than anyone else in Europe: the equivalent of 287 cans of sugary drink a year. Scottish GPs report that diabetes rates in young people are doubling, while 30% of under-15s are overweight.

But, said nutritionist Dr Helen Crawley, the arguments are hard to sell to parents. "They think giving water is 'mean'. Children 'don't like' water, so parents are tempted by 'healthy alternatives'." She recommends that, between meals, children should drink only milk or water.

Manufacturers reject any link between sugary drinks and obesity, saying the answer lies in exercise and education. The British Soft Drinks Association said a tax would not address the problem: "Soft drinks, which contribute just 2% of the total calories in the average diet, will not help address it. Over the past 10 years, the consumption of soft drinks containing added sugar has fallen by 9%, while the incidence of obesity has increased by 15%."

However, the political tide may be moving towards action on sugary drinks. A tax of seven cents per litre (about 6p) introduced in January 2012 in France has reduced consumption by 3.3%. Influential MPs including Ben Bradshaw and Keith Vaz, have called for such a tax, while last year's Liberal Democrat conference passed a motion in favour of it.

New research in the US has prompted 15 state legislatures to consider taking some kind of action on soft drinks (though last week New York City's attempt to ban "super-size" soda servings was ruled unconstitutional).

"There's no question that political action on sugary drinks is on its way," said Powell. "The science and the public health pressures continue to mount."