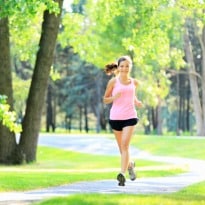 A recent study published in the Journal of the American College of Cardiology at suggests that running everyday, even for a few minutes and at a slow speed, is significantly beneficial and can reduce a person's risk of dying from heart diseases by 50 percent.

The group of researchers studied 55,137 adults, aged between 18 and 100, for a period of 15 years to determine whether there was a relationship between running and longevity. The study was conducted at Iowa State University in United States.

According to study's lead author Duck-chul Lee, since time is one of the strongest barriers to participate in physical activity, this study may motivate more people to start running as it shows that running for even five-seven minutes everyday may prove beneficial.

During the study period, 3,413 participants died, including 1,217 whose deaths were related to cardiovascular disease. Out of these, 24 percent of the participants reported running as part of their leisure-time exercise.

The study showed that participants who ran less than 51 minutes, fewer than 6 miles (about 9.6 km), slower than 6 miles per hour, or only one to two times per week had a lower risk of dying compared to those who did not run at all. The World Health Organization currently suggests 150 minutes of moderate-intensity exercise or 75 minutes of vigourous exercise per week. But, this study claims that running for even a couple of minutes daily will be helpful in the long run.

The researchers also found that runners who ran less than an hour per week have the same mortality benefits when compared to runners who ran more than three hours per week.

Therefore, it can be seen that distance, frequency, time or speed may have no effect on the benefits of running. The key is to sustain practice and be persistent.

Promoted
Listen to the latest songs, only on JioSaavn.com
It was concluded that those who persistently ran over a period of six years on an average had the most significant benefits, with a 29 percent lower risk of death for any reason and 50 percent lower risk of death from heart disease or stroke. On an average, runners lived three years longer compared to non- runners.

"Promoting running is as important as preventing smoking, obesity or hypertension," the researchers said in a statement. "The benefits were the same no matter how long, far, frequently or fast participants reported running. Benefits were also the same regardless of sex, age, body mass index, health conditions, smoking status or alcohol use," they added.