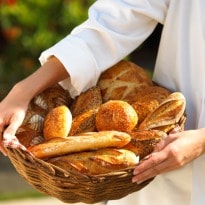 Scientists have rubbished decades of bad publicity directed at the humble bread for allegedly causing a host of complaints such as fatigue, stomach ache, bloating and headaches.

In recent years, bread has suffered from a serious image crisis. Now nutrition scientists believe that most of the health alerts about consuming bread are mere myths.

Researchers at the British Nutrition Foundation said that people are instead going without vital vitamins and minerals found in each loaf. They also dispute that wheat allergies are on the increase, the Daily Mail reports.

Aine O'Connor, who led the study, said that despite a massive downturn in bread consumption, Britain's obesity crisis is the biggest in Europe and continues to worsen. She said that sliced white bread, in particular, had been unfairly 'demonised' by health campaigners and TV nutrition shows.

O'Connor said that wheat allergies have not risen, but many people are are now incorrectly convinced they suffer from wheat intolerance or an allergy to gluten (the protein found in wheat).

Promoted
Listen to the latest songs, only on JioSaavn.com
Sales of bread have been dropping since the 1970s. In 1974, the average Briton got through a kilo of bread a week, by last year it had fallen to 700 grams.

A survey by the University of Portsmouth in 2010 found that one in five British adults believes they are allergic to a food, with most blaming wheat. Meanwhile, low-carb diets such as Atkins and Dukan haven't helped either -- the claims that carbohydrates cause blood sugar levels to rise, preventing the body from burning fat, have put many off their lunchtime sandwich.

Comments Yet despite this, bread is often the food people crave the most.