Should You Let Your Dog Lick You? 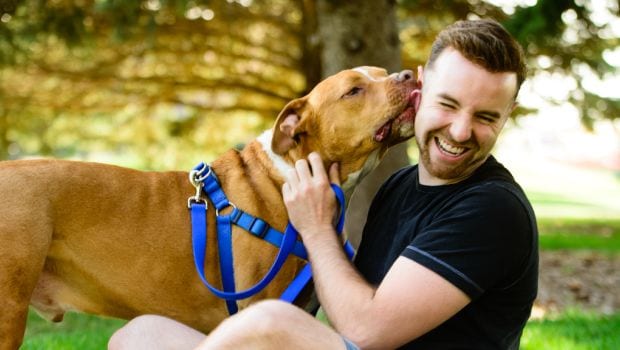 Highlights
Anyone who has a dog or doesn’t have dog is aware of their characteristic feature of licking out of affection. Some find the act adorable, while some outright gross but that doesn’t stop the dog from slobbering all over the face and arms of those they love. Dogs lick not just to show their affection, but it’s a sign of their security. Dogs love to lick their pack members. Licking for affection helps them release endomorphins which gives them pleasure, but beware, dog licking is not  indicative of just a mode of affection, it is also their form of communicating various messages which could range from “I love you” to “ My food bowl is empty”. New pet owners take a cue!

Many dogs owners have expressed that they feel a sense of calm when their dog licks them. But there has been a lot of debate concerning around the adorable act of expressing affection. It doesn’t take an intelligent mind to know all the nasty corners dogs dig their noses in due to which their muzzles may be full of viruses, bacteria and germs which serves as an invitation call for various diseases. While our immune system fights most of these foreign bacteria, certain bacteria in your pup’s mouth are zootonic in nature. These are capable of causing diseases in humans. They consist of clostrodium, campulobacter and e.coli which can cause gastroenteritis.

(5 Immunity Boosting Foods To Keep You From Getting Sick)

Some experts say that it is rare to get an infection due to the licking as the skin absorbs very little, but elderly people, young children and people who have low immunity should try to steer clear of it. HIV patients, patients on medicines for cancer or who’ve just had an organ transplant should especially maintain a safe distance from kissing their dogs, or letting them lick you.The thin mucous membrane lining our mouths is not so strong so as to fight the canine bacteria. Children are at agreater risk of contracting a tapeworm infection by swallowing infected remnants of flea from a dog’s mouth. There have been cases of dog licking resulting in brain abscesses and inflammation in human beings, as a result of Haemophilus Aphrophilus which was found in their saliva. Dog licking can also cause a host of parasitic infections like hookworms and roundworms. It is believed that a puppy can have as many as 30 million round worm eggs in its intestinal eggs, which can be transmitted via licking.
(7 Best Anti-Inflammatory Foods You Must Add to Your Diet)

So, should we refrain our little balls of fur from licking us completely?

Not necessarily. A certain set of precautions can save you from contracting infection. Mucus membranes of a person’s nose, eyes and mouth are at a greater risk of absorbing pathogens from a dog’s saliva, so if you can avoid having your dog lick these parts of your face you would be at a lesser risk. Other than that, obligatory precautions for example due vaccination, deworming and maintaining your personal hygiene like washing your hands and mouth with soap and water are also a must.

Also, try to keep your dogs away from dog faces as much as you can, this is also one of the reasons why a cat licking you is considered less infectious than a dog. Cats don’t hover around faeces. Although, the Pasteurella in a cat’s mouth,  can also cause infections of the skin and lymph node, commonly known as ‘Cat scratch fever’.