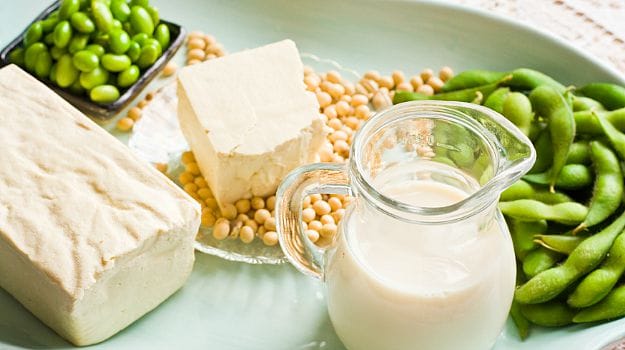 Love it or hate it, but there is no ignoring soybean. This power ingredient is known for a number of health benefits and has been used by various cultures across centuries. Popularly known as the vegetarian meat for its high protein content, this legume and its many forms – soymilk, soy nuggets, beans, tofu, miso etc.can be used in a number of ways to make delightful dishes.

Soybean is said to be the highest source of plant protein, per 100 grams can provide you about 70% of your daily protein requirement. Moreover, it is loaded with essential vitamins and minerals, particularly potassium, iron, magnesium and calcium.

According to a study conducted by researchers at the University of Hull, England, eating a diet rich in both soy protein and isoflavones can protect menopausal women from bone weakening and osteoporosis. Soybean foods contain chemicals known as isoflavones that are similar in structure to oestrogen and could protect women against osteoporosis by mimicking the action of hormone, said the study.

(Why Women Should Switch to a Soy Diet)Two hundred women in early menopause were given a daily supplement containing soy protein with 66 mg of isoflavones or a supplement with soy protein alone for six months. The researchers then studied changes in the women's bone activity by measuring certain proteins (ICTX and P1NP) in their blood. They found that women on the soy diet with isoflavones had significantly lower levels of ICTX than those on soy alone, suggesting that their rate of bone loss was slowing down and lowering their risk of developing osteoporosis.

Women taking soy protein with isoflavones were also found to have decreased risk of cardiovascular disease than those taking soy alone.

"We found that soy protein and isoflavones are a safe and effective option for improving bone health in women during early menopause. The actions of soy appear to mimic that of conventional osteoporosis drugs," said lead author Thozhukat Sathyapalan.

Osteoporosis is a common condition where bones become brittle and fragile from tissue loss. In women, bone loss occurs most quickly in the years immediately after menopause because they produce less of the sex hormone oestrogen, which protects against bone loss. The study findings were presented at the Society for Endocrinology annual conference in Edinburgh.