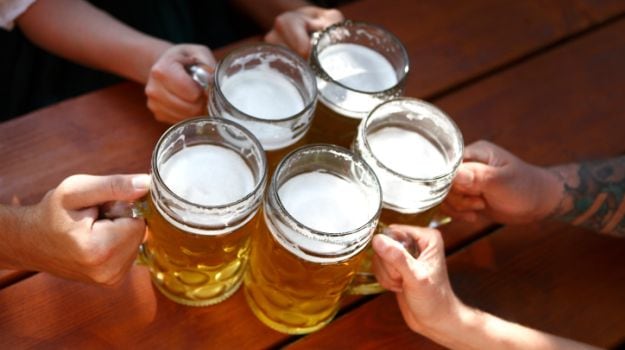 Binge drinking, especially amongst teenagers, has been a hot topic of discussion lately. Both health experts and scientists have highlighted how heavy drinking can cause permanent damage to your health.

A latest study, published in the journal Alcoholism: Clinical Experimental Research, shows that drinking alcohol heavily during adolescence results in long-lasting changes in parts of the brain that control learning and memory. Moreover, frequent alcohol exposure can lead to certain abnormalities that may affect one’s behaviour.

(Why Teenagers Should Avoid Binge Drinking)

"In the eyes of the law, once people reach the age of 18, they are considered adult but the brain continues to mature and refine all the way into the mid-20s," explained lead author Mary-Louise Risher, post-doctoral researcher at Duke University.

Scientists have warned that binge drinking as a teenager can also slow down emotional maturity. It is important for young people to know that when they drink heavily during this period of development, "there could be changes occurring that have a lasting impact on memory and other cognitive functions," Risher noted.

(Drinking Young Might Lead to Alcohol Addiction in the Future)To reach this conclusion, researchers periodically exposed young rodents to a level of alcohol during adolescence that, in humans, would result in impairment, but not sedation. Afterwards, these animals received no further exposure to alcohol, and grew into adulthood -- which in rats occurred within 24 to 29 days.

Using small electrical stimuli applied to the hippocampus, a brain region where memory and learning are controlled, researchers measured a cellular mechanism which is the strengthening of brain synapses as they are used to learn new tasks or conjure memories. It was found that the when the brain is exposed to high levels of alcohol in the formative years, it acts differently in adulthood.

"Something happens during adolescent alcohol exposure that changes the way the hippocampus and other regions of the brain function and how the cells actually look," added senior study author Scott Swartzwelder, professor at Duke University.

(Adult Anxiety: What Does Binge Drinking Have to Do with It?)

In the rodent model, it was seen that adult rats that were exposed to alcohol suffered from memory problems and neuropsychiatric impairments like lack of attention or the ability to learn new skills. Moreover, it causes certain physical changes to the structure of the hippocampal brain cells which makes them prone to disease or disorders.

The National Institute on Alcohol Abuse and Alcoholism in the United States defines binge drinking as heavy consumption of alcohol over a short period of time.  This refers to a situation where men consume five or more drinks, and when women consume four or more drinks, in a span of two hours. A lot of studies have shown that binge drinking can actually damage the brain faster than alcoholism. As a teenager, your brain is still developing and extremely sensitive to alcohol abuse which may disrupt the maturation process and affect cognitive functions.