The Fat Yoga: All About the Heavy Side 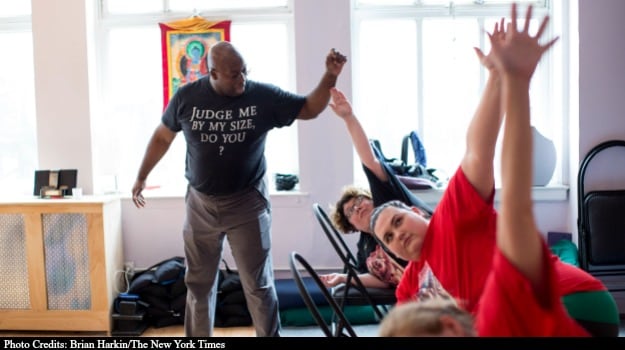 Michael Hayes teaching a class at his Buddha Body Yoga in New York.

The telemarketers and bottled-water vendors who call Anna Ipox's yoga studio in Portland, Oregon, often ask, "Is this the yoga place?"

Ipox does not answer yes. Instead, she said, "I make them say it: Say, 'Is this Fat Yoga?'"

That's the proper name of the studio, and one that many people struggle to spit out. One caller, typical of others, refused to respond directly, instead replying, "Well, how do I know you're fat?"

In addition to the fact that the word fat feels fraught, it's not usually paired with yoga. Yoga conjures stringy, bendy, barely clothed bodies - not soft, round ones. But that's the stereotype that specialized classes and studios, like Fat Yoga, around the country are trying to combat in an effort to reclaim the practice for people of all body types.

"I'm more interested in working with the large bodies," Mr. Hayes said."Many fat people have had terrible experiences at a regular studio, where the teacher assumes they're a beginner, is unwilling to touch them or is condescending and sees them through their own prejudice," said Ragen Chastain, a writer in Los Angeles who blogs at danceswithfat.org.

She said she applauds the honest labeling of these specialized studios.

The language is not incidental; it is no mere marketing gimmick meant to set people whispering.

"I wanted something that was unapologetically and enthusiastically voluptuous, and not as PC as 'Yoga for people who have pleasing curves,'" said Megan Stancill, who teaches a class called MegaYoga at studios in New York. "People pussyfoot around saying it, and I wanted to make it really clear who this was for. It's for people who are large."

Not everyone buys into yoga's new linguistics.

"Words are tricky," said Tracy Weber, who holds a class called Yoga for Round Bodies at her Seattle studio. "'Fat' may be an empowering word to someone, but for me it's a word that made me feel less than. If someone puts that word to me, I feel bad."

But most of these instructors have a similar intent: to associate yoga with images that transcend the Instagramification of perfectly fit people in the King Pigeon pose, so that it feels accessible to all.

"It's been said that yoga in America is miles wide but only an inch deep," said Abby Lentz, who owns HeavyWeight Yoga. "But it's spreading to places that it's never been before, and that includes people who thought, 'The only way I'm going to be able to do this is if I lose weight first.'"

Instructors of yoga aimed for large people customize the practice for their clientele. In yoga, unlike other workouts like running or Zumba, it is necessary to adapt your practice to your body size - something some teachers don't know how to do, said Amber Karnes, who teaches Body Positive Yoga in Charlottesville, Virginia.

"They don't understand why we can't step the foot forward from a downward dog to a lunge like everyone else," she said. She incorporates modifications for her students, like placing a bolster at the bottom of the spine for support when lying down with the legs in the air, or putting blocks under the hands while standing and folding forward, so the stomach does not get squished.

Jayvin Jordan-Green, 28, a student at Fat Yoga, found the studio by Googling "fat yoga," he said. He wanted a place to practice where the teacher wouldn't assume he was going through the flow to lose weight.

"I've had teachers who said, 'This is going to help you stay thin,' or 'This is going to get rid of this unwanted roll here if we keep practicing,' he said. "It's like, 'Maybe I like that roll, maybe the people I date like that roll.' I had a lot of teachers treat me like I'm their special project. They'll say, 'I'm going to make you the buffest person.' They see me as the 'after' picture, when I don't want to be the 'after' picture."

Some purveyors are adamant about exclusivity. Michael Hayes, who owns Buddha Body Yoga in New York, refuses to let smaller people take his classes; if you're too skinny, you are shut out.

"Am I excluding small people for larger people?" he said. "The answer would be yes. There are lots of studios for people who are smaller."

At his studio, he once refused three tiny women who wanted to take a class.

"People who are slender aren't happy about it," he said of his policy. "The shock, annoyance and pissed-off-ness is really profound. But I'm more interested in working with the large bodies."

Listen to the latest songs, only on JioSaavn.com
But other yogis are more flexible. Ipox of Fat Yoga said the point is to welcome people of all sizes. She said potential students often ask, "Am I fat enough?"

"I had to find a way to say to someone, 'You're plenty fat' or 'It's OK, you're fat,'" she said. "The script is completely flipped. A lot of people wouldn't call themselves fat anywhere but Fat Yoga, where being called fat is a good thing."